Volatility in price has varied among different countries for various reasons. Prices for US, EU and Canadian exports were relatively similar up to mid-2019, but have since diverged, with EU exports priced significantly higher than those from elsewhere.

Ms Wilkins said: “EU prices ended 2019 averaging $3.52/kg, but decreased by 18% by May. US prices have been more stable, albeit at a consistently lower level. Canadian pork has been similar to US product, but did experience a stronger peak of US$2.91/kg in January. Brazilian prices have remained the lowest of the key exporters, and have recently experienced a sharp fall (-9% from the end of 2019).

She added that extent of price volatility has been mixed between the individual exporters, pointing out that prices for US, EU and Canadian exports were relatively similar up to mid-2019, but have since diverged, with EU exports priced significantly higher than those from elsewhere. 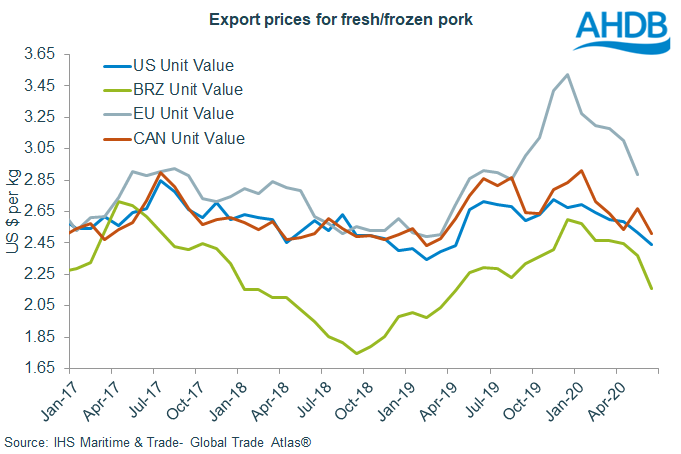 She explained that the differing levels of price volatility reflect the differing markets’ fortunes regarding opportunities to export to China and reaction to the coronavirus pandemic, and that EU exporters were well-placed to capitalise on strong Chinese demand at the end of last year, with US and Canadian access hindered by market access challenges (US pork faced additional tariffs and Canadian pork was banned for the second half of last year). “This generated a large premium for EU product as well as increasing demand for Brazilian pork, which also saw relatively strong price growth,” Wilkins said.

She added: “This year though, the value of EU pork has been knocked by falling domestic demand due to the coronavirus pandemic. The supply-demand balance in Europe has distinctly tipped towards extra supply. However, the situation in the US and Canada is less clear-cut, at least at wholesale level. Supply chain disruption has limited the supply of pork meat, and export relations to China have also improved. Hence, the change in market fortunes has been less dramatic in these nations.

“Going forward, reports indicate Chinese orders are picking up in Europe, and foodservice has normalised a little in recent months. Nonetheless, with rival exporters in a better position to supply China than last year, EU prices might not be expected to return to the previous highs.”