Reports suggest producers with smaller herds, in particular, have left the sector. With ASF getting closer to the German border, it is unlikely that optimism has increased in recent months, despite strong pig prices. 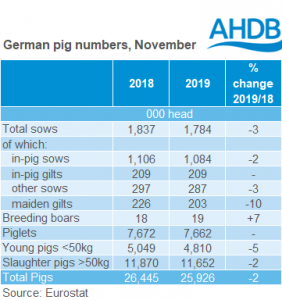 The figures also show a significant fall in the overall pig herd. The number of piglets was stable though, indicating further productivity gains. Nevertheless, the figures indicate that pig supplies are likely to remain tight during 2020, particularly in the second half of the year.