In outdoor systems, the number of pigs weaned per sow per year reached 23.9 in the latest 12-month period, 0.7 more than in January-December 2018. The improvement was particularly driven by a recovery in litters per sow per year, which had dropped in 2018. Pre-weaning mortality also improved, to the lowest level in at least eight years. 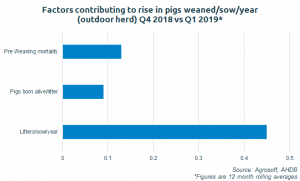 In contrast, productivity from indoor sows remained flat at just over 27.3 pigs per sow per year. A slight increase in pigs born alive per litter was counteracted by higher pre-weaning losses.

Unfortunately, across the GB herd overall, higher losses at the rearing stage meant the improvements in pigs weaned did not fully translate into pigs sold. Pig sold per sow averaged 23.9 in the 12 months to March 2019, just 0.1 higher than in January-December 2018.

AHDB analyst Alex Cook said: “Last week, we highlighted how producers were in the worst loss-making period since 2012 in the first quarter of this year. Production costs were broadly similar to the previous quarter overall. The small improvement in pigs sold per sow had minimal impact on the cost of production.

“However, if the improvement in pigs weaned had been carried over into pigs sold, production costs would have been around 0.4p/kg lower.”