Denmark and Poland recorded particularly sharp year-on-year declines. However, the Danish monthly figures can be volatile and should be viewed with caution. Spain continued to record higher throughput. Germany also bucked the trend seen for much of the year and recorded some growth. 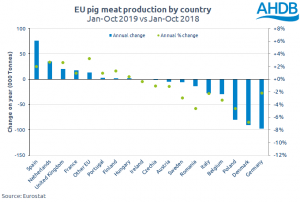 Only a few countries have reported November figures so far, representing about a third of the EU total. The initial figures suggest supplies tightened again in November; the countries involved record slaughter about 5% lower year-on-year. For example, slaughter was down 7% on the year in Denmark and 6% in France.

Developments in Germany and Spain, which are yet to report, will significantly influence the overall trend.