“The slight upturn comes as European market reports indicate an improvement in both national and international meat sales,” she said.

“Underlying Asian demand remains strong, and some EU catering outlets are now reopening. Nonetheless, much of the continent still reports difficulties with backlogs of pigs, and with ongoing uncertainty around coronavirus developments, the market remains finely balanced.

“Further price increases can’t be guaranteed soon, and will partly depend on how management of COVID-19 fares over the coming weeks.” 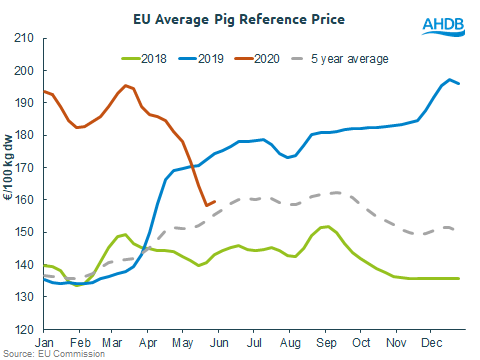 Up to mid-May, prices has been plummeting across the EU – in contrast to the UK, where prices have continued to inch up – but the week ended May 24 showed improvement in some major pork producers.

Prices movements in the latest week were varied between the major producing states.

The largest rise was in Poland, but prices in Germany also increased, which is significant as the German price is particularly influential, and may support some other countries in the coming week, Ms Wilkins said. Elsewhere prices were still falling, particularly in Spain.

While there have been reports of the EU-UK price differential drawing in cheaper imports, Ms Wilkins said the current differential is not historically large.

“With UK prices falling in euro terms, due to the weakening pound, the premium over the EU average fell to €24.78 in the latest week,” she said.

“This is still large in comparison to four weeks ago, when it was just €9, and of course, EU prices were above the UK for much of last year. However, in historic terms the price differential is not particularly large. Between 2014 and 2018, the difference between UK and EU pig prices was €25 on average.”