Fresh/frozen pork exports to China lifted by more than a third to 238,000 tonnes. Sales to the Philippines were nearly five times higher at 20,200 tonnes.

The UK and Japan were the only major markets to take noticeably less product this March (down by 19% and 16% respectively).

Offal sales to Asian markets were strong, with increases to the Philippines. Growth in shipments to Hong Kong offset declines to mainland China.

Pig fat sales reached the highest level since 2013 (before the Russian ban) in March, at just under 30,000 tonnes, with China buying increasing volumes in recent months and volumes to the Philippines also strong. 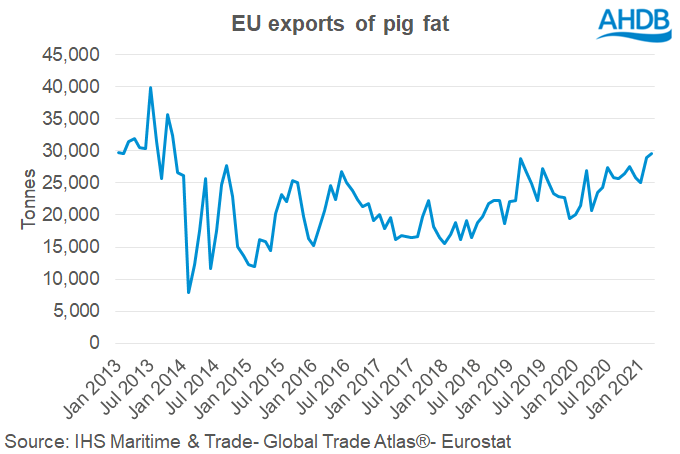 It was a mixed picture among EU member countries, with Spain leading the way in export growth, with shipments up by over 70%, whilst Germany saw a decline of nearly 40%, reflecting the fact it has lost access to the Chinese market. Denmark’s exports were up by 22% and the Netherlands increased by 37%. The mid-ranking exporters also generally saw noticeable increases.

AHDB analyst Bethan Wilkins commented: “The strength of exports sales in early 2021 has helped provide some support to the EU pig market at a time when demand within the EU is still struggling with the consequences of the coronavirus pandemic.

“However, more recent reports suggest that exports sales have now started to weaken, and with domestic demand still faltering, this has knocked pig prices back. Both the USDA and EU commission had forecast EU pork exports to reduce this year, and with signs export demand may now be falling, the EU pork market could be facing further challenges.

“Of course, much will also depend on how many pigs are available for slaughter in the coming months. However, overall EU breeding sow numbers had only fallen slightly at the end of 2020, so it’s not clear that total supplies will to reduce in the short-term.”