AHDB senior analyst Bethan Wilkins said that as a drop in pig prices has occurred since the surveys were taken, further contraction is expected in the latter half of the year.

“Only limited breeding herd decline (due to stronger maiden gilt numbers) could well limit any contraction in pig numbers going forward,” said Ms Wilkins. “Unless export markets improve, these supply levels may not offer much relief to the ongoing pressure on farmgate prices.” 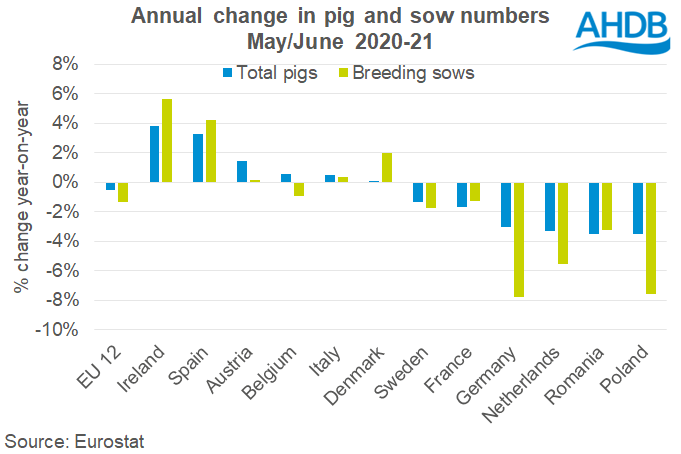 Sharp falls in pig numbers were recorded in Germany, Romania, Poland, and the Netherlands. In contrast, Spain, Denmark and Ireland all reported reasonable growth in both total pig numbers and the sow herd.

Ms Wilkins commented: “It may be that strong Spanish exports early in the year, helped by reduced competition from Germany due to the spread of African Swine Fever there, encouraged expansion. However, with the Chinese market now more difficult, Spanish pork markets have been under pressure.”