In Germany, the key market for sow meat in the EU, the price for an M1 grade sow had been nearly €1.70/kg in April. The sow price fell to around €1.00/kg by early June, reflecting declining demand due to the coronavirus pandemic damaging demand.

In July the disruption to processing capacity led to a further fall in the price, taking it under €0.90/kg, the lowest level on records going back to 2014. 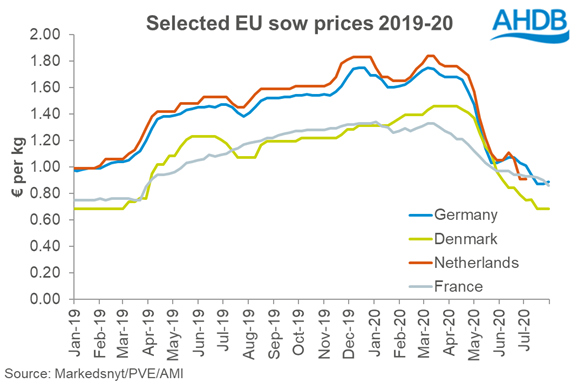 Prices elsewhere broadly followed the German trend. French and Dutch quotes also fell by over 10% between the start of June and end of July, to stand at €0.86/kg and €0.92/kg respectively. Dutch prices were not published for much of July, probably reflecting limited processing taking place.

Although prices on all the key markets were similar at the start of June, Danish prices have since fallen more sharply, losing nearly 25% over the past 8 weeks. At €0.69/kg, the Danish price is the lowest it has been since early 2019.

“In Britain, reports indicate that prices have also fallen, with less trade taking place on the back of limited demand. For the four weeks to w/e 11 July GB estimated sow slaughter was nearly 20% lower than last year, though it seems numbers have since largely recovered,” Ms Wilkins added.

But the re-opening of the Tönnies facility has now eased some of the market pressure and EU sow prices have been more stable in the past couple of weeks, even posting a slight uplift in Germany.

“While these signs are optimistic, Germany is still reporting that finished pig supplies are ahead of demand levels, so it might be too much to expect a significant uplift feeding through to our sow prices soon.”