Realistically, only the Conservatives or Labour have a chance of winning an overall majority, but other parties will have a say in the outcome.

A recent YouGov poll that translated voting intentions to individual seats suggested the Conservatives were on course for an overall majority of 68 seats. But the margins were tight and relatively small swings could yet see no overall majority, resulting in frenzied negotiations to determine who enters 10 Downing Street.

Conservatives: After a difficult start, the Conservatives have played a cautious campaign, trying to avoid catastrophic mistakes. Its manifesto, led by the promise to ‘Get Brexit Done’, also includes headline pledges for more nurses, police and childcare places, but its spending commitments have been questioned.

Labour: Jeremy Corbyn did not make the inroads he would have hoped for in the first half of the campaign. Labour’s manifesto was certainly ambitious, including plans to nationalise key industries, big spending hikes on the NHS and a promise to spend £58 billion on compensating women for underpaid pensions. But the campaign has been dogged by questions on how it would all be funded and Mr Corbyn’s undecided position on Brexit, as well as lingering questions over anti-Semitism.

Lib Dems: Jo Swinson has also found herself short of where she hoped to be in the polls, her strong reliance on the call to ‘Stop Brexit’ not delivering the expected support. Nonetheless, the Lib Dems and other anti-Brexit parties could yet have a big say in how the next Government is formed.

SNP/Plaid Cymru: The SNP, despite dividing opinion with its ongoing campaign for a second Scottish Referendum, is confident of making gains to reinforce its position as the dominant force in Scotland. It will be hoping to help prevent a Conservative majority. In Wales, the anti-Brexit Plaid Cymru is looking to add to its four seats.

Green Party: With a firm remain stance, the party hopes the increased focus on the environment and climate change will help it win a second seat.

Brexit Party: It is seeking a ‘clean break Brexit’ with no transition, but Nigel Farage’s decision not to stand suggests it is not exactly confident of picking up seats, although it could influence the outcome of some key constituencies.

THE KEY POLICIES FOR THE PIG SECTOR
The NPA manifesto features a number of key pig industry asks to deliver a ‘Fair Deal for Britain’s Pig Farmers’, including:

The NPA has contacted every candidate and is urging members to forward the manifesto to their local candidates.

NPA senior policy advisor Ed Barker has been through all the main Party manifestos to analyse how they match up on these and other issues that will shape our sector’s future.

You can view the NPA manifesto here

BREXIT
This is the most obvious point of difference between the parties. A Conservative majority Government would quickly approve the deal Mr Johnson secured with the EU to ensure the UK departs, as planned on January 31, setting in motion the transition period, where little will change until December 31, 2020.

But Mr Johnson is also pledging that he will secure a trade deal with the EU by the end of 2020 – and insists the transition period will not be extended beyond that date. That timescale appears to be incredibly optimistic, given the tortuous nature of Brexit negotiations so far and the history of every other EU trade deal that has been negotiated.

Labour’s position is ambiguous. Mr Corbyn has promised to negotiate a new exit deal with the EU, which will then be put to the people, alongside a remain option. Mr Corbyn, himself, would not take a position.

The Lib Dems, SNP, Plaid and Greens, with clear remain positions, will hope to force the hands of the two main parties in the event of no overall majority.

Ed’s view: “Boris Johnson is clear on the Tory position, but his optimistic claim that he can secure a trade deal in 11 months and insistence that the transition will not extend beyond 2020 potentially shifts the no deal cliff edge for the pig sector. I wouldn’t bet against a further extension, despite the Conservatives’ claims to the contrary.

FUTURE TRADE DEALS
The Conservatives are pledging to have 80% of UK trade covered by free trade agreements within the next three years, starting with the USA, Australia, New Zealand and Japan.

They are promising they will ‘not compromise on our high environmental protection, animal welfare and food standards’.

Labour and the Lib Dems also pledge not to compromise UK standards in pursuit of trade deals. Their trade deal goals focus more on the EU, however,. Labour would seek a permanent UK-EU customs union, allowing the UK to benefit from joint trade deals.

The Greens are the only party to specify a parliamentary role in maintaining and enhancing food standards in post-Brexit trade deals. The Brexit Party wants to reduce import tariffs to zero on certain foods.

Ed’s view: “This is a massive issue for the pig sector, which is still raw from the impact of the 1999 unilateral sow stall ban, which saw UK producers forced to compete unfairly with cheaper EU imports produced using stall systems. The pig herd halved as a result. We welcome the commitments from the main parties on import standards, but they do not go far enough. The US Government and meat industry is adamant that any future US-UK deal covering food must remove the EU’s restrictive regulatory standards in various areas.

The manifesto commitments do not include new legislation specifying that imports must meet UK standards, as we would like to see. Therefore, they don’t explain how the Government would protect UK producers and consumers from imports produced in ways that would be illegal here.

“We will continue to shout very loudly on this issue.”

LABOUR ACCESS
One of the Conservatives’ headline policies is the introduction of a post-Brexit points-based immigration system based on the Australian model. There would be ‘bespoke visa schemes for new migrants who will fill shortages in our public services’.

They also promise to raise the national living wage to £10.50/ hour for people over 21.

Labour would bring back the Agricultural Wages Board to set farm wages. Its general lack of clarity on Brexit prevents it from presenting a clear post-Brexit policy, although its manifesto does recognise ‘the social and economic benefit free movement brings’.

The Lib Dems would maintain free movement in the EU and would introduce schemes to ‘make the most of migrants’ skill’.

Ed’s view: “In our manifesto, we highlight the need for continued access to EU labour after we leave the EU, particularly permanent ‘unskilled’ labour for our farms, food processing companies and allied industries.”

FARROWING CRATES/ ANIMAL WELFARE
Boris Johnson went as far as highlighting Conservative plans to use Brexit to ban farrowing crates on the day the election was called. The subject has shot up the agenda in recent months on the back of Compassion in World Farming’s ‘End the Cage Age’ campaign, supported by none other than Theresa Villiers and Zac Goldsmith, both Boris Johnson appointments at Defra. 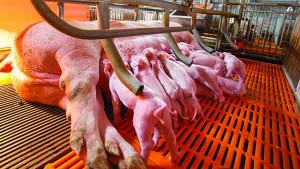 It was a surprise and relief, then, that there is no pledge to ban farrowing crates in the Conservative manifesto. This followed a concerted NPA campaign that saw members write to their MPs in large numbers to explain the animal welfare and economic realities of a ban.

The Conservative manifesto does include pledges to strengthen laws on animal sentience and end ‘excessively long journeys for slaughter and fattening’.

There is no mention of farrowing crates in the main Labour manifesto but a separate animal welfare manifesto published in September included a pledge to introduce ‘a ban on sow farrowing crates with a reasonable phase-out period, replacing them with safe, free-farrowing systems’.

Farmers would receive support payments to move free-farrowing systems for a transition period.

Labour also pledges to ban live exports for slaughter and fattening and strengthen the statutory codes of practice for farm animals.

The Lib Dems pledge to ban caged hens, but make no mention of farrowing crates.

The Greens propose a ‘complete ban on cages and close confinement and deliberate mutilation of farm animals’, as well as prohibiting the routine use of antibiotics for farm animals.

Beyond that, there is little mention of antibiotic use on farms in the manifestos, other than a Lib Dem pledge to ‘promote the responsible use of antimicrobials’.

Ed’s view: “While the issue has certainly not gone away, we very much welcome the absence of any pledge to ban farrowing crates in the Conservative manifesto. There is no doubt our campaign has had an impact. We thank all members who have written to their MPs – the volume of letters and the sound, logical arguments put forward have made the Party realise how damaging a ban would be and the backlash it would cause.

“We oppose a ban but believe, instead, farmers should be supported to make the transition on a voluntary basis.

“We will be watching very carefully to see who is put in charge at Defra and their stance on this issue.”

FARM SUPPORT
The Conservatives have pledged to maintain overall farm support at current levels until the end of the next parliament. But how that money will be spent would be very different, with the ‘public money for public goods agenda’ linking payments to environmental and animal welfare measures.

Labour and the Lib Dems signal a similar direction for farm support without making pledges on headline funding.
Ed’s view: “As a previously unsupported sector, the shift in the direction of support could open up opportunities. We will seek support that helps producers invest in modern production facilities that deliver good animal health and welfare and reduce our environmental impact.

maintain our diversity of systems and ensure we can supply consumers at all price points.”