There was a similar situation in Germany during the first four months of 2019: 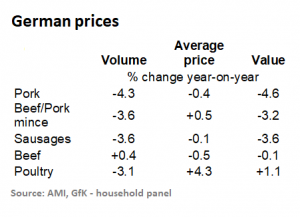 Good weather last April led to the start of the barbeque season. However, this year, the weather has been cold and rainy, deterring pork purchases.

Italian data for 2019 is not yet available, though full year 2018 figures have recently been released:

Ms Wilkins added: “The report indicates that processed meat held up a little better, with market value actually increasing 0.5% compared to 2017. However, considering a general upward trend in prices last year, this growth was probably not driven by higher sales volumes.”

Meanwhile, EU pig slaughter is expected to fall 3% in the first half of the year. Provisional slaughter figures from certain Member States support a declining trend so far. However, data will be needed from a wider range of countries to confirm the trend. 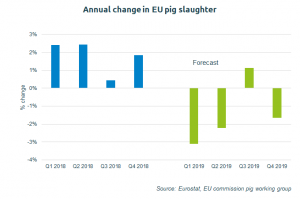 The second half of the year is more stable. This means slaughter is expected to fall by 1% in 2019 overall. Production might be broadly stable, if carcase weights increase.

ASF remains a source of uncertainty for EU production. There remains a potential for further spread into other Member States, especially within the wild boar population. This would be disruptive to supply chains and future production levels.

EU pig prices have generally followed expectations and risen sharply early this year. Prices are expected to average €173/100kg in the second quarter, which is broadly in line with current levels. Some further uplift is expected in the third quarter, averaging €183/100kg, before some seasonal decline comes into play at the end of the year.

Prices typically reach a peak during the summer, reflecting lower production levels at this time of year. Chinese import demand is also expected to increase in the second half, which would be price supportive. However, it seems this is not expected to counteract the typical winter price decline, as supply levels increase. 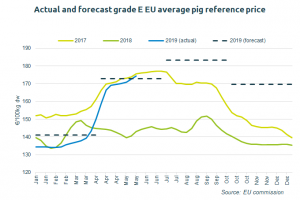 Ms Wilkins said: “ASF in China clearly creates some uncertainty around price developments. Some Member States are more optimistic about the potential opportunities than others are. How export licenses develop will be important. If more plants can gain approval to export to China, then opportunities will increase.

“On the other hand, if tariffs on US pork into China are reduced or removed, more global competition could make the outlook a little less positive.”

Ms Wilkins said that despite the uncertainty, this is clearly an optimistic outlook for EU pig prices this year.

She added: “We would expect a similarly positive outlook for British prices, though our prices have been slow to increase so far.Ultimately, provided UK retailers remain committed to sourcing British pig meat, the UK price premium should recover. However, the market may take some time to adjust, and Brexit could continue to disrupt normal market behaviour.”