He also denies having anything to do with the sudden proliferation in local wild boar numbers, according to the report.

Avon and Somerset Police said: “We are investigating, in partnership with other agencies, after receiving reports of potential offences under the Wildlife and Countryside Act and the Deer Act involving the release of wild boar and red deer in south Somerset.”

Releasing wild boar could result in a maximum of two years’ jail.

The NPA is quoted in the article. “Feeding wild boar is irresponsible but even more so if they are near to or on a pig farm. In addition to the disease risk, they destroy crops, gardens and woodland, cause road traffic accidents and have attacked people,” a spokesman said.

Simon Hoare, Conservative MP for North Dorset, told the Mail: “I’m aware of this via friends affected by the rampaging boar on their land. If hobby farmers want to play they must secure their land as their hobby affects the livelihoods of others.”

Labour farming spokesman Daniel Zeichner said that if the allegations were true, Mr Goldsmith should ‘consider his position’. He said: ‘People in senior positions like that should be obeying the law, particularly when directly relevant to the department that they’re a part of.’

A Defra spokesman said: ‘We’re aware of the claims and there is an ongoing investigation. It wouldn’t be appropriate to comment.’

‘Storm in a teacup’

Mr Goldsmith, who has reportedly upset local farmers with the release of the wild animals, has strenuously denied suggestions of any wrongdoing last night and called it a ‘storm in a teacup’. He accepted around 22 deer did escape and said he had been ‘naive in relation to guidelines’, but said he was ‘not aware of any meaningful wrongdoing’. 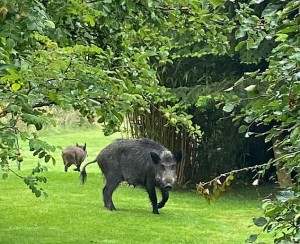 The article, by Mail journalist Guy Adams, explains how he has often spoken of rewilding his estate and the surrounding area. It also refers to ‘rumours’, currently being investigated by police, that Mr Goldsmith is behind the sudden arrival of a ‘vast number of wild boar’, a claim he denies. Photographs of boar have been taken in multiple locations the local area in recent months (, (left, as shown in a picture in the Mail article) and signs have been erected warning the public not to approach them, the article states.

Mr Goldsmith said they had been in the area for decades, although he does admit to having encouraged the boar population to visit his land. “I’ve had a hopper in the woods, feeding them for observation purposes for three or four years,” he told Mr Adams, who wrote that Mr Goldsmith told another local: “I am to blame for feeding them and that’s why they have lost their fear of humans.”

Mr Goldsmith also farms free-range Tamworth pigs at his estate and the article pointed out that he is meant to follow stringent biosecurity protocols, include preventing wild boar from getting anywhere near their livestock, due to the risk of spread of diseases like ASF.

The local NFU’s local representative is quoted as saying there is ‘clearly there is a big biosecurity risk here’.

Mr Goldsmith told the Mail: “I fed them on a different area to where I keep the Tamworths,” adding he had stopped the practice “and won’t do it again”.

He added: “In the ten years I have been here, I have never owned a wild boar or been responsible for the release or escape of any wild boar. I am categorically sure of that, because doing it deliberately would be illegal.”

However, a text sent to a neighbour appears to contradict that, although Mr Goldsmith said he must have ‘accidentally written ‘wild boar’ instead of pig’, while typing on his phone.