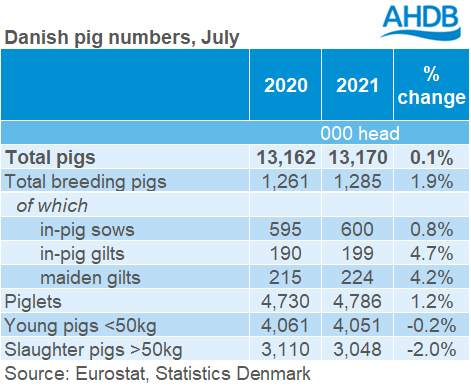 Ms Wilkins also noted that the increase in the breeding herd looks set to continue in the coming months, as the number of maiden gilts retained for breeding is 4% higher than a year earlier.

“A similar rise was also recorded in the April census, and we can see this reflected in the number of in-pig gilts,” said Ms Wilkins. “Nonetheless, growth doesn’t seem to be transferring at the same rate through to overall breeding herd numbers, suggesting sow culling rates are also higher than normal. Some large continental sow plants faced disruption due to Covid last year, which may mean some producers have more older sows to cull this year.”

She added that, as Denmark is a key supplier to the UK, increased pig meat availability there will support competition from the continent on the UK domestic market in the coming months.