With the combination of the drop in pig prices and the backlog of animals on farms, income is a major issue.

Mr Heap interviewed Suffolk pig farmer Peter Mortimer (main picture), who has been in the industry for 60 years, but has been forced to close his business after losing thousands of pounds. He fears for other producers.

“You can imagine, you’re feeding 5,000-10,000 pigs extra, you aren’t selling the pigs, with no revenue coming in, no cashflow – it is just going to be disastrous for some farmers,” he said.

You can view the feature HERE (approx 10 minutes in). 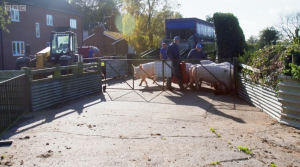 Peter Mortimer’s pigs are taken away for the last time

The programme, said 40 pig farms have had to permanently close because of the current crisis, even though the UK Government, in October, said that they would issue 800 temporary visas for butchers from overseas to relieve the dire need for abattoir workers. Those butchers are yet to arrive and are not expected to until January at the earliest.

However, the British Meat Processors Association noted that the pig industry’s crisis ‘is a two-year rebalancing exercise, not a quick fix before Christmas’.

Kate and Vicky Morgan, the sisters behind the Save GB Bacon campaign, were also interviewed. They currently have 2,500 extra pigs on their farm, meaning that the farm is going through an extra 10 tons of pig feed per day.T

Commenting on the knock-on effect of overweight pigs, Vicky said: “We have to work to a very tight specification given to us by the processor, if the pigs go overweight then they are basically not worth any money, they don’t fit into the pack sizes, it’s a disaster.”

NPA chief executive Zoe Davies said: “The large processors anticipated that a certain percentage of butchers would go home, but didn’t anticipate that when restrictions started to be lifted…they wouldn’t come back.”

The programme also looked at the benefits of smaller abattoirs. Dr Davies added: “Smaller abattoirs are incredibly important, because farmers that have alternative outlets to supply have been far less affected than those who are wholly reliant on the bigger processing plants.”

The presenter spoke to John Merrick, who works in a small abattoir in Derbyshire. He said: “The resilience of small abattoirs during this crisis proves they could play a key role in the UK’s future food security.”

However, he added: “I think the future of small abattoirs is in peril, it’s all a question now about succession, it’s our job now to show young people coming into the industry that there is a future for small abattoirs so that they will take on small businesses like this and drive them forward.”

The Financial Times also recently published an article discussing the effects of the pig industry’s crisis on farmers.

In the article, Dr Davies estimated that the financial loss for pig farmers, due to the crisis, totalled around £130 million for the first half of 2021 alone, while many farmers are now either shutting-up-shop or having to drastically change business models.

One example of which is pig farmer Chris Leamon, who has for a long time, with his brother, Rob, bred pigs on an Essex farm set up by his parents nearly 70 years ago. They are now moving to a ‘bed and breakfast model’, which will see them raising animals owned by another, large-scale farmer or processor.

He said the pig sector traditionally operated on a five-year cycle of boom and bust , where ‘you had to learn how to manage in bust times’. With the new model, there will be ‘less management and less risk’, he added.

According to Dr Davies: “There is general acceptance that there is going to be a restructuring of the industry as a result of [the crisis].”

She also argued that the pig sector should receive ‘some form of financial support from [the government]’, as banks are seeing the headlines about the horrors of the current pig sector, and are becoming ‘very twitchy about extending overdrafts and loans’, when people should be recognising ‘that this is a unique set of conditions’.