It said it has also listened to British consumers and the recommendations made in a review of the scheme by Dr Jonathan Birnie in 2019, which identified limitations in the current standards around animal and worker welfare and environmental protection. Examples of proposed changes in these areas include:

Animal Welfare, including housing structure and cleanliness and making it absolutely clear what is and isn’t acceptable when handling animals.

Worker Welfare to ensure members are taking sensible steps to protect the safety and wellbeing of workers on farm.

Environmental Protection, including the inclusion of the Farming Rules for Water, which are already legislation and aim to reduce soil erosion and nutrient run-off.

There are a number of proposed changes to the pig standards, including:

A new standard being consulted on would require all people involved with pigs to undergo an online training course in handling provided by the AHDB.

Additionally, Red Tractor’s requirements around handling could also be strengthened to make it clear what is and isn’t acceptable.

In some cases, the proposed changes are recommendations for producers, highlighting the ‘direction of travel’, rather than being enshrined in standards.

There is a new draft standard requiring training in medicines and antimicrobial resistance, aligned to requirements in other Red Tractor farm schemes.

A new standard requiring persistent high users of antibiotics to implement an antibiotic reduction plan has also been proposed.

These changes are intended to build on the ‘huge strides’ pig producers have made so far in recording antibiotic use and would support the pig sector in meeting the next set of RUMA’s Targets Taskforce targets for antimicrobial stewardship.

New standards have been drafted aimed at minimising the risk of disease spread between and within farms. Deadstock collection would have to be done at the perimeter of the farm and members would be required to sign up to the industry’s Significant Diseases Charter, which aims to ensure rapid communication of disease outbreaks.

The proposed changes are now out for consultation for two months – the consultation and review closes on March 5. Red Tractor is seeking input from across the industry before finalising the scheme standards from November 2021.

Red Tractor said the proposed amendments are primarily about streamlining, legislative compliance and responding to change.

These include simplifying some of the requirements for farmers to drive greater understanding and compliance, and rationalising standards which are common across multiple sectors, providing improved clarity for both farmers and their assessors.

It said the three-stage process for changing the standards – ‘committee, consultation and consensus’ – adheres to gold standard recommendations of the British Standards Institute 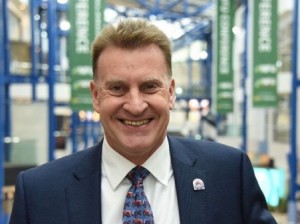 Red Tractor CEO Jim Moseley said: “We are a proven world leader in food chain assurance, but we cannot rest on our laurels.

“Red Tractor is recognised as a symbol of British food quality but to maintain this, our standards must continue to evolve with the times, to ensure they address changes in legislation, industry practice and reflect the emerging issues on shoppers’ minds.

“At a time of ever-increasing scrutiny, preserving the public’s trust in UK agriculture and the Red Tractor logo has never been more important.

“These proposals strive to strike a delicate balance which protects and promotes our members, reassures consumers and customers, while acknowledges the implications of the challenges that the industry faces with future trade deals and the agricultural transition plan.”

Red Tractor is also asking members and stakeholders for their views on what matters to them and their business.

Mr Moseley added: “Farmers have been an intrinsic part of the process in drawing up the proposed new standards, but now it is over to the membership and stakeholders to have their say.

“Red Tractor was created to become a symbol of trust, safety and responsible production. Twenty years on, our purpose remains the same and we are absolutely delivering on it.”

In a recent interview in Pig World, Red Tractor Pork Board chairman Stewart Houston urged scheme members to engage in the consultation process.

“I know the main representative bodies will respond, but I would love to hear from every single pig farmer, both positive and negative comments. We have tried to make it easy to respond – there will be a way of indicating whether or not you agree with each amendment and new standard in turn.

“I need to give a commitment that we will look hard at all of the comments that come in and reflect them in the final standards where we can.”

The NPA has played an important part in shaping the pig sector standards, with the involvement of chief executive Zoe Davies on the technical advisory committee and producer Phil Stephenson representing NPA members on the pork sector board.

Dr Davies said: “This is a significant revision of Red Tractor’s standards and it is really important that members take a good look at the proposals and respond to the consultation by March 5. Red Tractor has made it as easy as possible to make your views known on the individual proposals.

“We have been involved throughout the process and, while we don’t necessarily agree with all of the final proposals, we have secured changes in some areas where the original proposals could have been more problematic for members and pushed for some to come in as recommendations as opposed to full standards to give producers more time to adapt.

“Many of the changes however reflect the new Defra pig welfare code, so are necessary to bring the standards in line with the law.

“We will issue our detailed response to the consultation and make it available to members for comment, but it is equally important for individual members to respond too.”