The value of pig meat (inc offal) imports increased by 7% to total £208 million during November. This was slightly behind the increases seen in volumes, which indicates a reduction in price. This is unsurprising given that German pork is particularly price competitive, due to an oversupplied market, and low domestic pig prices in Germany following its ASF outbreak, AHDB analyst Charlie Reeve said.

The value of total UK exports went down 15% to £54 million in November compared to a year ago. The is likely to be because of less product availability, due to Covid-19 related difficulties at some processing facilities, Mr Reeve said.

The value of exports to the UK’s largest export destination China dropped back slightly on the previous month in line a decrease in volume, although prices paid in the region remain fairly strong. 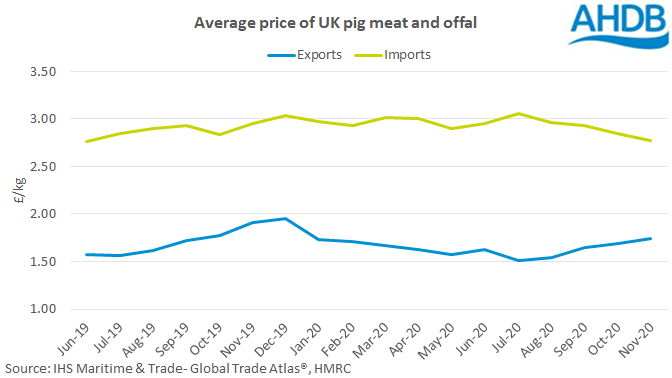 Looking at the bigger picture, volumes for the first 11 months of 2020 still show imports down slightly and exports to be up in volume compared to the same period in 2019. The continuing importance of the Chinese market was highlighted by a 34% increase in pork exports to China in the year to November.