The analysis paints a bleak picture, with incomes lower under both scenarios across all sectors. In each sector, a no deal leaves farmers worse off. 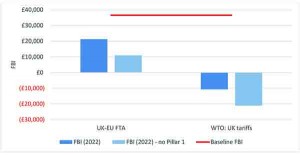 The modelling, updating previous AHDB analysis, includes updated global pig prices and takes account of carcase balance in the pig sector. Recent announcements regarding the removal of direct payments and how the UK would apply import tariffs under a no deal scenario were incorporated.

The analysis also factors in Government announcements on migration, noting that access to non-UK permanent labour would be restricted, resulting in an estimated 50% hike in labour costs. As a labour-intensive sector, the pig sector is hit particularly hard by this.

The economic terms on which we leave will have a big impact, the modelling suggests.

Under an FTA, pig production revenue would actually increase by more than £14,000 on the back of higher prices due to increased trade friction pushing up import costs. The UK would maintain tariff protection against non-EU pork imports.

However, this would be more than offset by a £26,000 rise in labour costs, alongside increases in feed and contract costs.

But under WTO rules, the UK’s current tariff protection against non-EU imports would largely disappear and cheaper world pork supplies would be expected to flow into the UK, pushing down prices. Production revenue would fall by almost £21,000, in addition to the increases in labour and contract costs, resulting in negative FBI.

Pig producers might look to introduce or expand other enterprises, although as pig production is often a landless activity, this will not always be possible, the report suggests.