Meanwhile, the EU is adamant the UK can’t have it both ways – for example, free trade and freedom from key EU regulations. Leaders, such as Germany’s Angel Merkel, are promising ‘tough negotiations’, although it might be that Prime Minister Theresa May’s toughest negotiations will be around her own Cabinet table and with the MPs sat behind her.

UK-EU trade deal
National Pig Association (NPA) senior policy advisor Ed Barker was at the heart of the pig industry’s lobbying efforts in 2017.
The likelihood of some sort of transitional deal means we should at least minimise the chance of a ‘cliff edge scenario’ from a no deal in March 2019, he said.

“From the EU trade talks that will follow, our request is pretty simple – free market access with mutual recognition of standards, but with a clear process of border security to prevent disease spread,” he said.

He sought to dispel the suggestion in a recent AHDB Horizon report that a ‘no deal scenario’, in which tariffs are imposed on EU imports and exports, would look good for the pig industry.
“In this scenario, pig prices would go up in the short-term,” he said. “But this would not only dampen demand in favour of other meats, but could cause our Government to panic and revert to a cheap food agenda, allowing in products from outside the EU.

“We would also lose vital export market access for cull sows to the continent, while new trade barriers would compromise the crucial carcase balance that is one of the main reasons for – and benefits of – the current two-way UK-EU trade in pork products.” 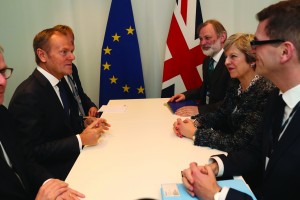 Non-EU trade deal
The Department for International Trade (DiT) is also looking at new Free Trade Agreements (FTAs) with target countries, such as the US, and at how to improve existing trade relationships already in place, including with China, a massive market for the pig sector, alongside other economies in South East Asia.

Mr Barker said: “Our concern is that the UK will prioritise deals with countries like the US, New Zealand and Australia ahead of expanding developing economies like China.”

The other big fear concerning new trade deals is, of course, the risk of cheap, lower standard imports – the subject of much fevered political discussion last year.
“We seem to have had a divided Parliament and Cabinet on this trade-off between freer trade and protecting our standards, although there is a genuine fear among some politicians that we could end up allowing in foods from places like the US, Brazil or Mexico produced to standards well below those permitted in the UK or EU,” he added.

“The use of sow stalls are commonplace in North and South America. Ractopamine can also still be used, plus antibiotic use data is limited – it all allows a much cheaper cost of production model (see page 56 for figures).
“With the Government seeking new markets for our service sectors with other countries keen to export agricultural products, our own farming sectors could be sacrificed if we are not careful. Our great concern is, while the Government may well wish to stop imports of certain products coming in, they could have a tough time defending those decisions at WTO level or under any FTAs. This requires Government will.

“That is why the NPA has been doing so much leg work in Westminster to explain to MPs the effects of importing these products, which would be illegal to produce here.”
Appearing in front of the Environment, Food and Rural Affairs (EFRA) Committee in December, Mr Barker called for clarity on the Government’s plans for non-tariff barriers to protect the industry from lower standard imports and urged it not to repeat the mistakes of the 1999 sow stall ban.

Tariff Rate Quotas
One area that could help, however, is Tariff Rate Quotas (TRQs) – set tonnages that one country can export to another before tariffs are applied.
“In our discussions with Defra and DiT, they have backed our view that the TRQs we take from the EU should reflect the average levels of imports of non-EU pork over the past five years,” Mr Barker said. “This figure is very low (tiny amounts of non-EU pork is imported into the EU each year) for a number of reasons. However, it does mean that on Day One, we will have some adequate safeguards in place to prevent our market being flooded with cheap imports from elsewhere.”

He added: “We are, of course, still in the EU, which is trying to conclude a series of FTAs with South America and Japan. If these deals are done swiftly it could mean that the UK takes a portion of them with us.”

Labour
The NPA carried out a survey in the autumn that highlighted the pig sector’s reliance on EU labour and fears over future access. More than half of respondents employed at least one EU worker, which the survey showed has become harder to find since the Brexit vote.
Mr Barker said the Government was not being explicit on the labour issue, despite welcome assurances that it will allow existing EU migrants the right to stay after we leave, including, in theory, their families. “However, when it comes to accessing future EU labour, we are concerned the Government has confined its interest to seasonal workers as opposed to permanent, so-called ‘unskilled’ workers,” he said. “We are asking for the pig sector to be classified as a ‘high risk sector’, which would make it faster and easier to bring in EU labour.” 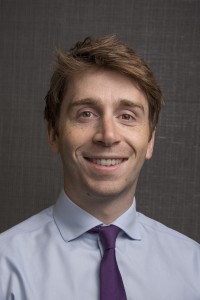 Regulation and farm policy
With Brexit dominating Parliamentary time, 2018 will be too soon for any major legislative changes, Mr Barker added.
“This is an opportunity as it means Government is forced to simply improve existing legislation,” he said. “For pigs, we have heard that soils are already in the crosshairs of Defra. The real signal of regulatory change will come when the Government publishes its Agricultural White Paper in the spring, setting out what it wants to do with a repatriated agricultural policy.”

In terms of replacing the Common Agricultural Policy, Defra Secretary Michael Gove has made it clear he wants fundamental change, with a renewed focus on public goods, particularly, the environment and possibly health and welfare. He has also mentioned volatility payments and incentives for new technology and new entrants.

The NPA is consulting its producer and allied industry representatives on what the pig industry’s priorities should be. “This is undoubtedly an opportunity for the pig sector,” Mr Barker said. “Our main areas of interest so far include: incentives for improving buildings, mechanisms to counter volatility, insurance options, R&D in areas like health, welfare and resource efficiency and more resource for export promotion.”