The number of pigs weaned per sow per year in outdoor systems averaged 24.30 in the 12-months to March, 0.42 up year-on-year, reflecting more litters per year and more piglets born in each litter. However, a slight increase in pre-weaning mortality hampered potential gains. 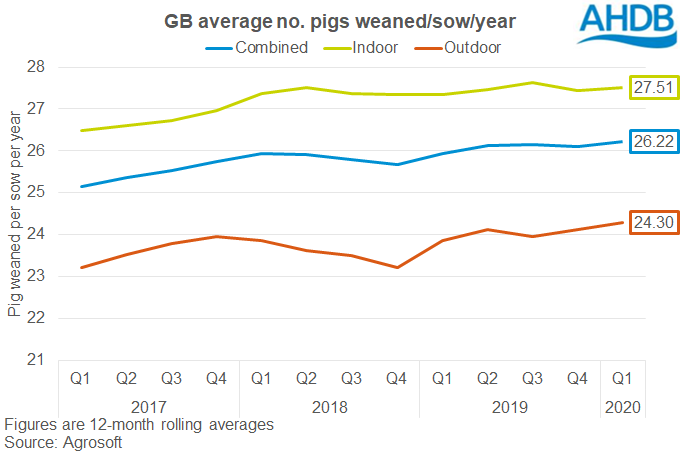 A considerable proportion of the gains over the 12-month period were made in January-March this year alone, with pigs weaned per sow per year up 0.11 more than in the 12-months to December 2019, due largely to an increase in pigs born alive per litter. 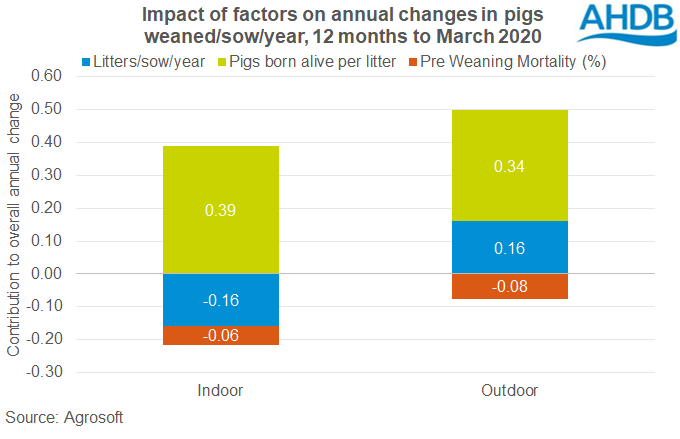 Over the 12 months to March 2020 overall, increases in piglets weaned, allied with a decline in rearing mortality, translated into an additional 0,39 pigs sold per sow per year on the previous 12 months, taking the average to 24.30 pigs.

However, these improvements were particularly driven by improvements in Q2 2019 – more recently, the number of pigs sold per sow has been similar to year earlier levels. Higher rearing and finishing mortality levels have offset increases to the number of pigs weaned. This perhaps reflects the significant disease challenges the UK pig industry faced last year, Ms Rusk added.

“Looking ahead, rising numbers of pigs weaned presents the potential for growth in pigs slaughtered per sow in the latter portion of the year,” she said.

“Though of course, this will depend how the rearing and finishing herds perform. Periods of hot weather, as we’ve seen recently, can also have a knock on impact on fertility and productivity; we did see numbers of pigs weaned per sow fall in the months following the hot summer of 2018.”

To read more about the latest herd performance and cost of production figures, click here.