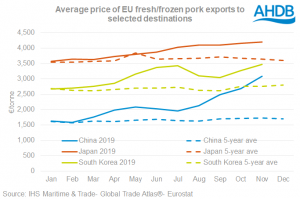 The gains made throughout the year, mean EU pork exports for the year to date were up 26% at 2.48 million tonnes. Unsurprisingly, China was also the main growth market for the year as a whole. 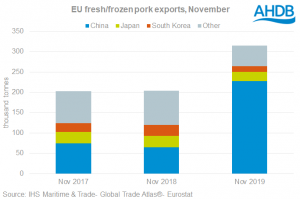 Pig offal exports in November were up on the year, rising by 18% to 132,000 tonnes. Growth was driven by a 36% increase in shipments to China. Volumes to other, smaller markets including Vietnam and the Philippines declined. For the year to date, pig offal exports were up 10% on the year.