There have been spectacular price rises right across the EU on the back of a big increase in shipments to China, allied with a tightening of supply.

The EU reference price reached 153p/kg at the end of May. In early February, it had stood at less than 117p/kg, the 36p increase representing a 31% rise in the space of less than four months.

In fact, during that period, producers in all the major pig- producing member states have benefited from the China effect – except one – as the table below shows.

A meagre 4% increase in the UK, while its main competitors enjoy rises in excess of 30%, has been described as ‘a kick in the teeth’ to UK producers.

Prices showed some signs of life in May, but nothing to match the dramatic increases seen elsewhere. The Standard Pig Price for the week ended May 25 was up a disappointing 0.89p to 145.34p, despite tight supplies, at 154,700 head, 14,400 head lower than last year.

Despite welcome export growth to China, the UK price remained a depressing 3p below May 2018 levels. Producers have been watching on with a mix of exasperation and deep suspicion. 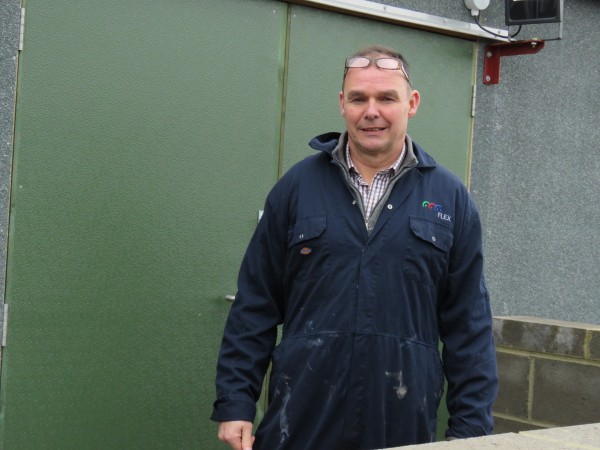 NPA chairman Richard Lister has been inundated with calls from members wanting to know what is going on. He described May’s ‘pitiful’ price increases as an ‘insult to the hard work of the industry’.

“Producers are frustrated and angry and are demanding answers. Everyone is aware of the situation with China and the impact it is having on prices in the EU and globally – but we are not seeing any of it. It is creating a real sense of distrust,” he said.

This all comes at a time when UK producers have been shouldering the burden of low prices and high input costs, particularly feed, for nearly a year.

Figures from AHDB show pig production margins turned red in the second half of 2018. In the last quarter of 2018, producers were typically losing £7 on every pig they produced. The losses will have increased into this year, potentially by another £2-3/pig, as average prices fell further in the first quarter, while costs have remained high.

Early-spring optimism that fortunes were about to turn have evaporated, however. The NPA has been keeping the pressure on, including issuing a press release outlining how UK pork producers are ‘suffering mounting debts as processors pocket millions’.

The association has done some public number-crunching on the losses being incurred by UK producers.

AHDB estimates that another 6-8p needs to be added to the UK price to make it equivalent to the EU price to account for the likes of levies, deductions and haulage costs, which apply in the UK only.

Taking this into account and also factoring in weekly slaughterings and average carcase weights, the NPA calculations show:

NPA chief executive Zoe Davies said: “These figures highlight the extent to which UK producers are losing out because of the actions of UK processors. We are talking about losses in the region of £8m to £13m over just five weeks, which is totally unacceptable.”

SO WHY HAVEN’T UK PRICES RISEN?
Brexit stockpiling has long been held up as the main factor holding back UK prices in the early part of this year.

AHDB analyst Bethan Wilkins said this has been reported by a number of processors. “It makes sense – EU market reports indicate tight supplies are also important to the current upward price trend, alongside Chinese demand. With high volumes of pork in store, we would not have been experiencing the same tight supply situation.”

Tulip agriculture director Andrew Saunders urged UK producers to be patient when he addressed delegates at the Pigs Tomorrow conference in May.

Mr Saunders stressed how ‘much more stable’ UK prices have been relative to volatile EU prices in recent years and pointed out that UK producers have generally enjoyed a price gap over imported pork from the likes of Denmark, the Netherlands, Germany, Ireland and Belgium.

“This has been challenging to us as processors,” he said. “We have seen that gap close recently with the swing up in European prices. European pigmeat is getting sucked in to China, effectively making that product more expensive in the UK. Thus, UK pig prices will respond in due course.

“Why have they not responded so far? Mainly, because all pig processors probably killed far too many pigs in January and February this year. We had slow and weak demand and we filled our freezers up. We were all preparing for March 29, which didn’t happen.

“Over the last six to eight weeks, a lot of that frozen pork has been pulled out to meet the changing market circumstances. So watch this space.”

Mr Saunders, who also blamed weak demand and logistical difficulties in getting stocks out of frozen stores, was challenged by Dr Davies about when supplies would be exhausted from these ‘mythical stores’.

Mr Saunders insisted all Tulip’s major competitors were in the same boat and, collectively, processors ‘probably killed 15- 20% too many pigs in January to March’. “Processors have to realise the value tied up in these frozen stocks, but once it’s moved, UK pig prices will respond – the good times are coming,” he said.

But the NPA insisted Brexit stockpiling alone could not be held responsible for the price situation. Many producers, mostly preferring to stay anonymous, have made it clear they believe processors have been deliberately holding prices back ahead of the inevitable price increases that are coming.

Mr Lister said: “We have spent the last 10 years being told the price can’t go up further because Europe is too far behind. Europe is well ahead of us now, but we are now told prices can’t go up for another multiple set of reasons. It is very difficult to know what to believe and where we stand. The excuses simply do not stack up – especially when we see the likes of Cranswick posting profits of £90m and looking to invest £100m over the next year.”

Dr Davies added that the NPA has also seen messages from processors to customers explaining that they are having to raise their prices significantly as the price of the pork they are buying is rising due to China’s ASF outbreak. “Some people are being economical with the truth, I suspect,” she said. 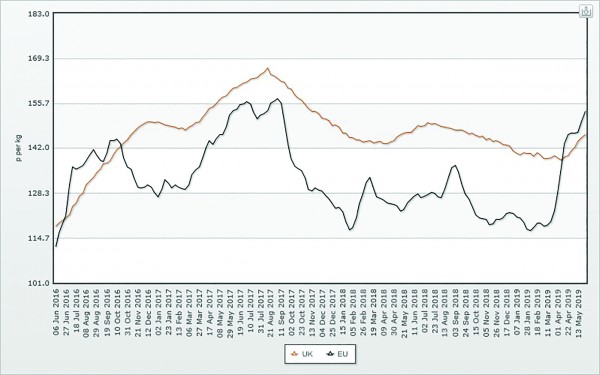 WILL UK PRICES RISE?
Most pundits predict UK prices will, as Mr Saunders predicts, have to increase, particularly as the stores empty. The SPP is ‘clearly on an upward trend’, AHDB’s Bethan Wilkins said.

“EU prices may flatten off for the time being. However, in the UK, market conditions are likely to remain supportive of the price in the coming weeks. Prices at this time of year typically follow an upward trend as supplies tighten seasonally,” she added.

“Also, UK product typically receives a premium over EU product, due to greater demand from some sections of the market. This premium has eroded at the moment, but is probably not sustainable. UK demand will also be important though.”

But Mr Lister stressed: “There is a lot of catching up to do. Tomorrow is just not good enough. We should be getting more now.

“The level of frustration and anger continues to grow. I am having a lot of conversations with producers who want to talk about exactly what we can do to remedy the situation.” 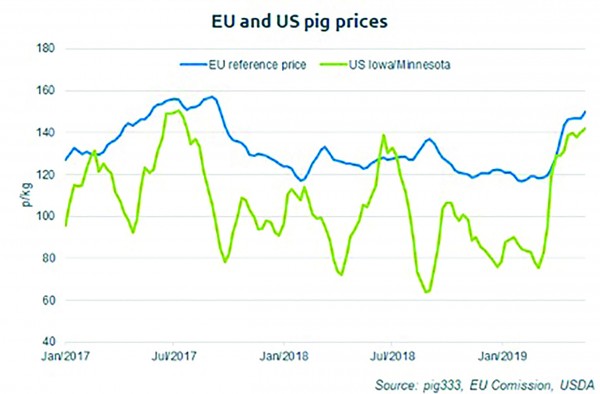 MEDIUM AND LONGER- TERM PROSPECTS
Analysts are united in their belief that the impact of Asia’s ASF crisis on global pig prices will be sustained.

There is no sign of the authorities getting the virus under control. Speaking at Pigs Tomorrow, Gira analyst Richard Brown said he was forecasting a 24% drop in productivity in China in 2019, while the virus is now starting to spread right across Asia, which will prompt further import demand.

Some observers go further. Jim Long, president of Canadian genetics company Genesus, said, following a visit to China, that the loss of the sow herd could be anything from 40-60%.

“It appears that the big loss of sows was in the Jan- Feb time period. The expectation is the real big drop in hog numbers will start in August” he said.

The upshot will be a period of ‘super-normal’ profits for pig producers, according to Mr Brown, who also warned of a ‘catastrophic’ price crash once Chinese production eventually recovers (see Pigs Tomorrow supplement for more).

However, Ms Wilkins noted that there has been a lull in the market response to the situation of late.

“Market reports from continental Europe also suggest Chinese traders are now not accepting further price rises. The Chinese government has insisted all frozen pork stocks must
be tested for ASF by July. This

may be temporarily dampening import demand, as stored pork is pushed onto the market to avoid the risk of finding contamination,” she said.

In the US, optimism that trade negotiations would result in the removal of the additional 50% tariff on US pork exports to China has abated in recent weeks.

“The Chinese cancelled some orders of US pork in early May, and futures prices have cooled. The outlook has become more cautious,” Ms Wilkins said.

Despite these bearish factors, the likely substantial fall in Chinese pork production means import demand should start to strengthen again in the second half of this year, providing ‘further price support’.

Mr Saunders also had some words of caution on the UK’s ability to cash in on the Asian import boom.

“There is significant potential for global growth, but we must remember that only 50% of UK pig processors have Chinese export licenses, so EU pork chains will probably ramp up supply to China, leaving UK production to fill the continental void,” he said.

Brexit has stalled applications for export licences, he said. A Chinese trade delegation is due to visit the UK in the autumn, but there were no guarantees this will kick-start the process, he added.

…and boosts the UK, too