Despite the weakening currency making the production costs of other countries comparatively higher, GB producers still experienced one of the largest rises in production costs last year. This reflects a significant (+16% year-on-year) rise in feed costs, driven by both rising feed prices and higher consumption rates amongst the finishing herd. As such, GB costs were around 1p/kg above the EU average, at an estimated 137p/kg in 2017. 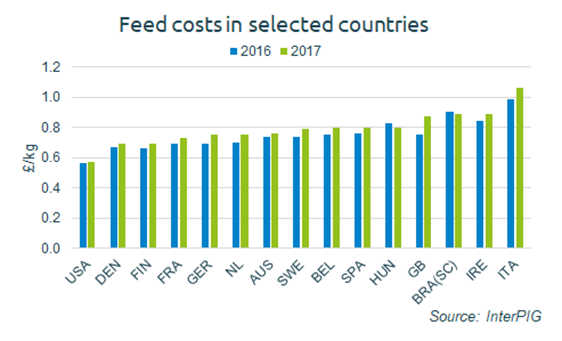 The more favourable position of GB producers was therefore because of the widening price premium for British pigs. GB pig prices were 8p/kg above the EU average price in 2017, compared to 4p/kg in 2016. 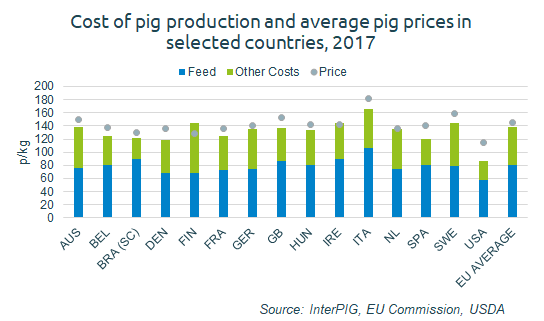 The most profitable EU country was Spain (+20p/kg), which had the second lowest production costs in the EU (120p/kg) and this more than compensated for the below average pig prices. The lowest cost producer in the EU was Denmark, at 118p/kg. Producers are estimated to have made a profit in most EU member states, although Ireland is a notable exception (-2p/kg). On a global scale, US producers were the most profitable of the group (+29p/kg), reflecting much lower production costs (86p/kg).

It is worth noting that Spanish producers did not show significantly better physical performance in their breeding herd than British producers, with piglets per sow similar to GB indoor producers. Spanish producers used less feed though, with feed prices similar to those in Britain, helped by the best finishing feed conversion ratio of the group. Spain also has low labour and capital costs compared to other EU countries. Matching these figures may be unachievable for GB producers, but this does highlight that control of all input costs, not just feed, is important.

Of course more recently, the financial position of producers has likely worsened across all of the countries covered. European countries have experienced rising feed prices this year, reflecting the dry summer conditions. Pig prices have also declined sharply across the globe, meaning many producer margins will have weakened during 2018, with some likely starting to lose money.