This article, which sparked a wave of national coverage, coincided with the publication of Compassion in World Farming’s online Factory Farm Map. It highlights hotspots where these ‘crazy and cruel’ farms are most prevalent, although it does not pinpoint individual farms, as was initially feared.

Are the UK’s farms
getting bigger?
The Guardian/BIJ investigation highlighted a 26% rise in the number of ‘intensive’ poultry and pig farms licensed by the Environment Agency (EA) over the last six years to 1,700. Only 12 counties now have no pig or poultry farms classified as intensive.

More to the point, certainly as far as pigs are concerned, the large UK farms do not compare with the biggest US units, some of which contain hundreds of thousands of pigs, according to National Pig Association (NPA) senior policy advisor Georgina Crayford.

“There is no comparison. We are talking about a completely different scale of farming here to what we see in places like the US and Brazil – 750 sows would not be considered large in these places. Our large units will also face much stricter rules, particularly on welfare, than in most other major pig producing countries,” she said. 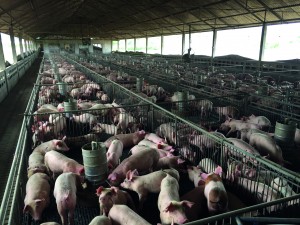 Economic drivers
The gradual trend towards larger farms in the UK is part of a long-running social and economic trend.
Around 85% of UK pigs are kept on holdings of at least 1,000 pigs, with around 820 farms of 100 or more sows now accounting for 89% of the national breeding herd, according to data from the latest Pig Health and Welfare Council (PHWC) report.

With many commercial pig farms having gone out of business over the past decade, NPA chairman Richard Lister, who farms 3,300 indoor sows across four units in North Yorkshire and Nottinghamshire, said the trend towards larger farms was driven by economic reality.

“Small farms are under pressure across all species and price continues to be a major driver. A farm of 2,000 pigs is not necessarily sufficient to employ a full-time person, so, as we are constantly encouraged to become more efficient to compete globally, we need economies of scale,” he said.

The UK’s diversity
In fact, the UK boasts one of the most diverse pig sectors in the world.
The PHWC report showed:
* Around 40% of the commercial pig breeding herd in England is kept outdoors
* Of the remaining 60%, most indoor sows are kept in straw-based systems until farrowing
* 20% of weaners, 5% of growers and 2% of finishers are kept outdoors
* 40% of weaners, 60% of growers and 45% of finishers are kept on straw indoors, with the rest kept on indoor slatted floors.
Research by the NPA has shown this diversity of systems, a major selling point for the UK pig sector at home and abroad, to be unique. “Very few pigs anywhere else in the world, apart from Sweden, are kept outdoors or indoors on straw,” Dr Crayford said. 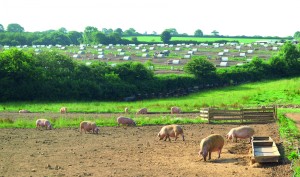 Big isn’t bad
But many people connected to the UK pig industry are adamant that the basis of the ‘big is bad’ argument is deeply flawed anyway.

Take the proposal for a 2,500-sow pig unit at Foston, in Derbyshire – one of the focal points of the ‘factory farm’ opposition movement. The plans set out how investment in the high-tech modern facility would be used to maximise pig welfare at all stages, including 360 farrowing crates, and minimise health risks through, for example, high level biosecurity, state-of-the-art ventilation, quality veterinary care and stockmanship, as well as minimising risks to the local environment, producing renewable energy and supporting the local economy.

Mr Lister said. “There is no evidence at all to suggest that a large farm has poorer welfare than a small farm. A large farm is likely to have more trained staff on site and people there for more hours in the day.”
Annie Davis, a past-president of the Pig Veterinary Society, said opponents of large farms were driven by emotion, not evidence.

“The badly researched, unscientific propaganda from the so-called ‘welfare’ campaign groups, offended by our industry and its economics of scale, adds misleading emotion into the debate, and has little to do with the reality of animal welfare on farm.

“Good and bad farms exist regardless of scale. It is well recognised, from both current experience and scientific evidence, that larger farms are no more likely to have compromised welfare than smaller ones. Put simply, management and stockmanship are the critical factors for animal welfare, not the size of the farm,” she said.

NFU deputy president Minette Batters, Charles Godfray, director of the Oxford Martin Programme on the Future of Food, Richard Griffiths, British Poultry Council chief executive and Christine Nicol, professor of veterinary science at the University of Bristol, all reiterated the message that husbandry, not size of farm, is the key to animal welfare.

The RSPCA agrees that: “It is not the scale of production that, in itself, has an impact on animal welfare, but the conditions under which the animals are kept… welfare can be poor or good on both large and small farms.” 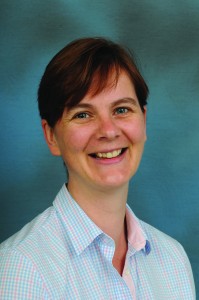 But, highlighting the progress being made in reducing pig industry usage, Dr Crayford said equating production systems with antibiotic use was “far too simplistic”.

As well as ignoring the ‘wider economic and practical context’ of pig production, it also ignored the benefits of modern, high-tech pig buildings in promoting high herd health. In fact, one reason why countries like the Netherlands and Denmark have been able to reduce usage to such a degree is that those governments have financially supported producers to invest in such facilities that ‘support lower antibiotic usage’, she said.

Embrace the diversity
Mr Lister said: “The diversity of the British pig sector is one of its greatest strengths, offering consumers at home and abroad choice and a range of price points and giving producers more clout in a diverse market.
“But to suggest one system is superior to the other is wrong. We are hugely proud of our animal health and welfare standards and our collective goal must be to promote the very best standards, regardless of size or system, while ensuring we are efficient and competitive in the marketplace.”