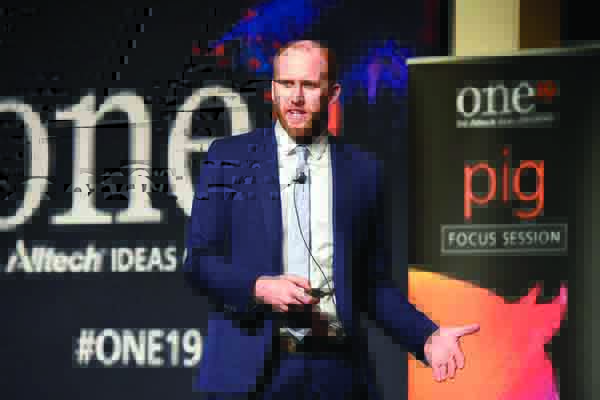 The team thought the same might apply to ASF. To test the theory, they commissioned third-party scientists in China to take thousands of samples from feed mills at a rate of 250 a day, testing bulk feed ingredients, including corn, soy, rice, wheat and distiller’s dried grain with solubles.

Of the ingredients and complete feed tested, 1-2% was positive for DNA from the virus. The researchers also detected virus DNA in dust around the feed mill, as well as on feed trucks and trailers, complete feed in bins, hair and shoes of feed mill staff, and in the fresh market where pigmeat is sold to shoppers.

With this knowledge, the Pipestone researchers began to investigate the survivability of ASF during transportation from China to the US. Testing the virus in different feed materials ranging from soya bean meal to complete feed, they simulated a 37-day trip across the Atlantic to see if the virus survived.

“We were able to prove that if a feed is inoculated with a virus, it does survive across the ocean,” Dr De Jong told delegates.

“The second question was whether it could infect pigs if they consume that feed, and researchers at Kansas State University showed that that’s possible.

“We didn’t have this knowledge nine months ago, and this completes the circle for us,” he added. “If it can survive in feed, then it can make pigs sick, so quality control of feed is critical.”

With so many feed ingredients coming from Asian countries, Dr De Jong said having that knowledge should encourage farmers to make more considered sourcing decisions. That could include asking feed suppliers where their ingredients come from and asking ingredient manufacturers about their biosecurity practices.

“The goal is to protect global trade and herd health, so you have to ask if you’ll continue sourcing from ASF countries, what the level of contamination could be, what the transportation time is, and how long you can store it,” he said.

“We also need to ask whether we can mitigate the effects of the viral load in the feed.”

In a bid to do this, Dr De Jong said Pipestone had partnered with Alltech and animal health company Cornerstone to develop a dietary supplement that could help protect pigs from viral infections.

Named APC after the three companies involved, the blend of organic acids and essential oils has been shown to prevent the transmission of PEDv, PRRS and Seneca Valley virus from feed to pigs.

“When PED hit the North American herd we started work on this product to stop viral transmission in the feed,” Dr De Jong explained.

“We conducted two trials and found that if you inoculate the feed with APC at a rate of 15lb/tonne the PED virus can’t replicate. What’s more, including APC in the diet didn’t affect average daily gain or feed conversion.”

Having replicated the trials against PRRS and Seneca Valley virus, Dr De Jong said the team is confident that APC – which is being launched in the US this month and will be available in Europe later in the year – could work against a number of damaging viral infections.

“This is a groundbreaking study,” he added. “We focus on filtering air to protect pig health, but until now we’ve never really done anything with our feed.

“We’ve shown time and again that viruses can be transmitted by feed, so it’s important that farmers think about the interventions they could make to protect their herds.”