We will build an even stronger British food brand on the back of the highest health and welfare standards in the world.

And, while keeping out the riff raff, ready supplies of seasonal labour will be secured to help produce and process our food. Even if you don’t believe him – and many in Birmingham for the annual NFU Conference didn’t – he certainly deserves credit for his openness. 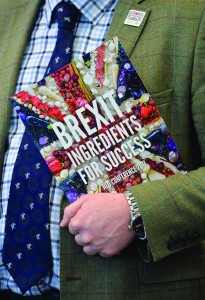 The post-Brexit landscape dominated the NFU Conference. Pic courtesy of the NFU

Animal welfare support
One of his most intriguing policy ideas, as far as the pig sector is concerned, would see the Government rewarding farmers under a new domestic farm policy for delivering high health and welfare standards, including grants for upgrading buildings.

So how would this work in practice?

Speaking to Pig World at the NFU conference, Mr Eustice said he was examining existing accreditation schemes in places like Germany and Denmark that recognise high animal welfare.

Also heavily influenced by the RSPCA, he is taken by the idea of a tiered scheme where payments vary depending on how far farmers are willing, or able, to go.

“The RSPCA has suggested you could have several tiers, for pigs, for example, going from ‘free-range’ at the top, down to barns with straw and ‘outdoor bred’, which means they have been outdoors for the first few weeks of their life,” he said.

He suggested two possible types of payment. “First, should we be looking at grant support to help farmers, and pig farmers are a good case in point, invest in new buildings that would enable and facilitate higher animal welfare?

“These could be one-off grants that would help them renew their estate and replace old buildings and old systems, and make it more possible to go to systems seen as higher welfare with better consumer acceptability.”

He is also looking at the sort of ongoing ‘top-up payments’ organic farmers currently receive.
“For organics, there is a premium in the market for those that are Soil Association-accredited, but there is also a top-up to the Basic Payment to recognise some of the costs of being an organic producer. Could we do something similar?” he said.

His plans have, so far, received a mixed reception within the pig industry. While welcoming the prospect of support for public goods the market won’t pay for, the National Pig Association (NPA) producer group has expressed concerns the policy could unfairly favour those with the land to convert to outdoor production.

Does it also fly in the face of Government and industry aspirations to improve the pig sector’s efficiency and competitiveness?

“I don’t think there is a clash of ideology,” Mr Eustice responded. “This would be voluntary and farmers would opt to do it, if it suited their enterprise. There may be some farmers who take the view they are going to remain completely commercial and not adopt this.”

A new approach to farm husbandry could also help farmers reduce their reliance on antibiotics, he added. “But, fundamentally, I think there is a great opportunity to create an international brand based on the best animal health and welfare standards in the world,” he said.

“We are in the very early stages of this, but Andrea Leadsom and I are very clear that we would like a much stronger dimension around animal welfare in future agriculture policy. We want to reward farmers for public goods.”

Import fears
But how, Mr Eustice and Mrs Leadsom were repeatedly asked in Birmingham, is the Government going to keep out food produced to lower standards, as it negotiates new trade deals with the likes of the US, Canada and Brazil? Some fear livestock will be ‘sacrificed’ in pursuit of these deals.

Potential trading partners are looking on eagerly. The US National Pork Producers Council ‘applauded’ Donald Trump’s stance on free trade and looked forward to a ‘stronger, mutually-beneficial trade relationship with the UK’, following the US president’s recent talks with Prime Minister Theresa May on a future US-UK trade deal.

Even if standards could be agreed on health issues, like use of ractopamine in pork, could animal welfare standards ever realistically be included in these deals?

“Yes they could,” Mr Eustice told Pig World. “Ultimately, in these types of negotiation it doesn’t really matter what the US asks for. What matters is what the UK is willing to grant by way of a trade agreement.

“We have got a manifesto commitment to safeguard and promote animal welfare within international trade negotiations. It is quite possible to safeguard our standards in a trade deal.”

He stressed that these sorts of deals were still many years off even being discussed. “We can’t even contemplate, let alone discuss, any trade deal with the US until we have actually left the EU,” he said. 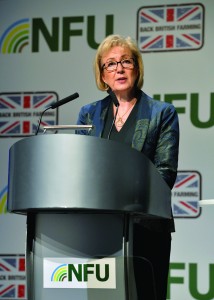 EU trade deal
Mr Eustice said the ‘single most important element’ of the Government’s Brexit negotiations would be securing free trade (FTA) and customs agreements with the EU.

Again, he faced a sceptical NFU audience, despite Mrs Leadsom’s comments the day before that the UK would ‘strive for the best possible access for our farmers and food exporters’, with ‘zero tariffs and zero non-tariff barriers as our starting point’.

Echoing the fears of many in Birmingham, whose businesses could by crippled by the imposition of tariffs on EU exports, Welsh Environment Secretary Lesley Griffiths said the prospect of leaving the EU without an FTA ‘keeps me awake at night’. After all, other member states would be much less concerned about a deal than we will be, she added.

Mr Eustice appeared unconcerned, suggesting the EU needed the UK as much, if not more, than we needed them, pointing to an EU trade deficit of more than £60bn, including over £18bn in food.
We would be starting from a common set of standards and regulations.

An FTA built on similar arrangements would therefore be ‘easier to put together than some people suspect’, especially as the UK intends to transpose current EU regulation straight into UK law, he said. The EU would be ‘silly’ not to accept what the UK is offering.

Labour supply
Yet, at the same time, the UK wants to control immigration and end free movement from the EU. Mr Eustice failed to assuage delegates’ fears this could leave them bereft of the labour needed produce and process the UK’s food. The Farming Minister was criticised when he tried to reassure farmers ‘nothing is going to change until we leave the EU’, with no new arrangements needed ‘until 2020’.

An angry Ali Capper, the NFU’s horticulture chairman, told him businesses like hers would be recruiting next year for 2019, when we are expected to leave the EU, and needed answers soon.

Stressing that, as a former strawberry farmer, himself, employing 300 people, he understood ‘the challenges of getting seasonal labour’, Mr Eustice said the Government ‘will be looking at seasonal work permit schemes’, although ‘it won’t be a free-for-all’.

With no mention of the permanent labour the pig sector is so reliant on, he added: “There will be some kind of control and we will make sure we have labour for the sectors where we need it. By the time we leave, you will have an answer and successor schemes will be in place.

“Once we leave the EU, we are free to do whatever we like as quickly as we like.”