“Actigen also binds and removes harmful pathogens from the gastrointestinal tract. Its use as a feed supplement at the grower finisher phase has been widely investigated and consistently proven to be of value.”

Improving FCR
In a 2012 trial to evaluate Actigen’s performance on grower/finisher pigs taken from 20kg to 100kg, two equal groups of 220 were fed starter, grower and finisher diets with the treatment group receiving the control diet plus 400g/t of Actigen in all three feeds, fed ad-lib. Measurements included growth, feed intake, feed conversion and mortality. The results are shown in table 1. 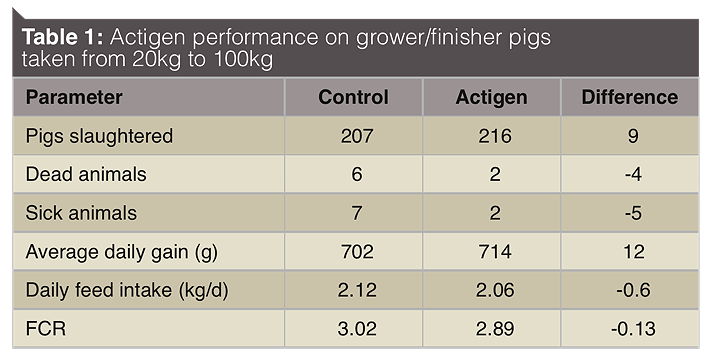 “Including Actigen in the diet led to a higher growth rate of 12g/day and higher end weights of +0.8kg, yet feed intake was 60g/day lower, giving a feed conversion improvement of 0.13 (or 0.10 when calculated in the 20-100 kg liveweight growth range),” Alltech’s UK technical support specialist, Lauren Dimmack, says. “This improvement clearly indicates better nutrient uptake in the gut.” 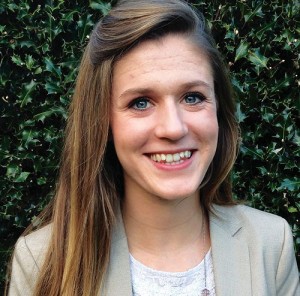 Improved immunity
The ability of Actigen to enhance intestinal health by contributing to the healthy immune status of pigs has also been clearly demonstrated. In a trial on 64 weaned pigs, split into two groups, both were challenged with porcine reproductive and respiratory syndrome virus (PRRS) with one treatment group being fed the control diet plus 0.04% Actigen.

Infection with PRRS decreased pig performance. However, Actigen-fed pigs infected with PRRS showed increased feed efficiency and a raised immune response with an increased number of PRRS-specific antibodies.
“These findings confirm that Actigen strengthens both the immune response and feed efficiency in the face of diseases such as a PRRS challenge,” Mr McArdle says.

Growth promotion
Actigen has an equally vital role to play as a growth promoter in situations where antibiotic growth promoters, and substances such as copper and Tylosin in animal feed, are monitored or prohibited.

In an 80-day trial involving a total of 960 grower/finisher pigs, taken from 28kg to slaughter at 100kg, animals were allocated to four diet groups:

In the grower phase (day 0 to 38) pigs fed the Actigen diet produced a superior growth response to those offered the control diet or the diet containing copper. The Actigen group achieved the best feed conversion in both the grower and the finisher phase (see Table 2). Improvements in carcase yield were also seen in the group fed Actigen.

“While the dietary treatments didn’t significantly influence the carcase weight of pigs – the Actigen group recording only a 3kg advantage over the controls – the dietary treatment did influence the carcase yield,” Ms Dimmack says. “Those pigs offered the Actigen diet had a higher dressing percentage at 75.33% than those receiving the other diets, increasing the yield of saleable pork, and this was achieved without any negative influence on backfat thickness, with all groups recording normal low values of 9.0 to 9.3mm.”

Cost benefit
In a cost benefit analysis based on the improvements in carcase yield, the net advantage for pigs offered Actigen was approximately five times greater than either copper or Tylosin at $7.88 (£5.24)/pig (see Table 3).

“Similarly the return on investment in this study was substantially greater for pigs offered Actigen at 15.3:1,” Mr McArdle says. “This reaffirms the value and versatility of this natural, yeast-based feed supplement. It promotes healthy growth, improves immunity and feed conversion, and is an equal, if not superior, alternative where copper outputs are monitored or antibiotic growth promotants are prohibited.
“It allows pig producers to maintain the economic advantages of efficient, lean growth.” 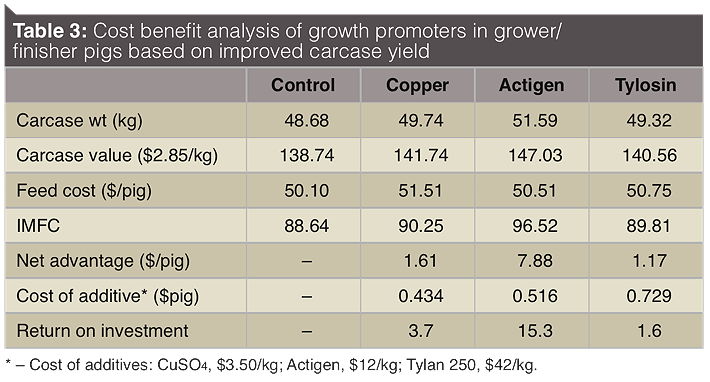