The new midweek meal campaign seeks to address these challenges.
An effective consumer marketing campaign finds common ground between industry need and consumer demand. The research revealed consumers have certain criteria for their midweek meals – even if they don’t consciously realise this.

A busy family life, in addition to juggling work and home commitments, dictate midweek meals need to be quick and easy. The survey revealed that people are also trying to eat healthier meals during the week, leaving the weekend for treats.

Conversely, consumers are aware of how stuck in a rut they are when it comes to midweek eating. This key insight is what the Midweek Meal Campaign is concentrating on – because this is where pork can be introduced as a solution to break away from the mundane weekday menu.

One of the biggest challenges faced by the marketing team is to convince consumers that pork is not a fatty meat, as this is often cited as a barrier to buying it.
Working in consultation with Buckinghamshire & Surrey Trading Standards, the marketing team arranged for nutritional testing on the cuts it was focusing on, fresh pork loin medallions, to be undertaken by an independent laboratory to prove what it suspected to be the case: that pork could claim similar nutritional health and fat levels to chicken.

AHDB’s marketing team was delighted when the results showed that not only did these cuts come back as low in fat, but also low in saturated fat – a great message to share as part of AHDB Pork’s PR and advertising activities.

Kirsty Walker, head of domestic pork, said: “Recipe development has been a critical element of the campaign. We know that for consumers to adopt a change in behaviour, ie to buy pork midweek, they need to have a positive initial eating experience, otherwise they will not return. As fresh pork loin and fillet medallions are lean and quick to cook, there is a danger of overcooking – which would result in poor eating quality.
“The challenge our team had was to create on-trend recipes which fitted the midweek meal criteria to deliver a tasty eat, while still remaining an ‘easy cook’ for the consumer.

“Not a simple task, but the recipes we’re presenting have all been developed with busy working parents in mind who are not likely to be confident cooking pork. For example, some of our recipes include marinating the meat before cooking to help consumers get a consistent and enjoyable eating experience.”
To help fulfil this recipe challenge, the pork marketing team enlisted the help of Food Innovation Solutions, a company that aims to provide ‘food and beverage innovation solutions that excite, inspire and resonate with real customers’.

Conscious of a lack of confidence in cooking pork, and a tendency to overcook leaner cuts, the team’s partnership with development chefs has helped them understand the science of what happens to the meat during cooking and what processes would make it more juicy and delicious – and could easily be applied to home cooks.
One of the advantages the Pulled Pork Campaign had when it ran in 2015 and 2016, was that pulled pork, as a dish, was very on-trend and familiar to consumers. 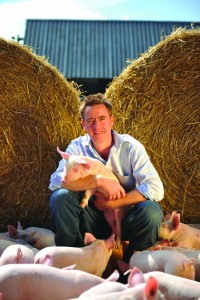 The producer’s view
AHDB’s pulled pork campaign was widely considered to be a huge success, with the second phase – which ran earlier this year – generating an estimated £13 million boost for the industry.
Analysts from Kantar Worldpanel revealed that nearly a third (30%) of the incremental spend came from consumers who had not previously bought a pork, beef or lamb roasting joint and 56% came from ‘light’ buyers of pork.

And pig producers are confident the new campaign can deliver similar results. Fergus Howie, of Wicks Manor Family Farmers and Butchers, in Essex, said: “This new campaign is taking a longer-term approach to change perceptions of pork, and, I for one, am confident it will help consumers start to think about pork loin medallions as a quick and easy option the whole household will enjoy during the week. It’s a fully integrated campaign, which gives clear instruction to the shopper about what cut to buy and how to cook it to get the best results.”

Loin medallion is, according to Mr Howie, the perfect choice for the campaign because its nutritional profile and versatility competes with other popular proteins.
“Loins command a high value in the UK, but some UK loins are de-graded and packed as non-UK product as we don’t have enough premium sales opportunities for UK loins due to reduced promotions in the bacon aisles,” he said. “However, the truth is that the loin medallion is a perfect fit for a midweek meal.”
If producers are to ‘take control of their destiny’ old perceptions of pork need to be challenged through such marketing initiatives, Mr Howie said.

“I think producers need to see levy spent positively and if it’s spent driving sales and improving the image of pork that has to be a good thing,” he added. “The pig industry acknowledges the value of the technical support that comes from AHDB, but for me I’m happy to see increased investment in marketing – it feels right to be challenging the old perception of pork.”

As the Midweek Meal Campaign focuses on cuts consumers are less familiar with, work needed to be done to increase awareness before the TV advertising started in late-September. For this purpose, the PR team has been liaising with journalists since May, in order to get more pork medallion recipes featured on print pages.
And, working with bloggers and the social media glitterati, a ‘digital influencer’ campaign has been running behind the scenes to create a background noise and to champion pork medallions through social media channels.
For the campaign to be successful, consumers need to be able to buy the product. Aligning the supply chain is a difficult job. Competing brands working together towards a common goal is rarely witnessed, but AHBD Pork is uniquely positioned to achieve just this.

In any marketing campaign, TV advertising tends to be the area of the greatest spend, but it yields the greatest returns. The TV advert for the Midweek Meal Campaign uses humour to highlight a common occurrence discovered through consumer research – that families eat a lot of chicken during the week. It’s quick and easy and people know how to cook it.

These are all the traits AHDB Pork marketing team is looking to achieve for pork. The TV advert will run during high-profile programmes until November 5, after when all retail attention will turn to Christmas.
In the New Year, when health is high on the agenda, the TV advert will return with a strong health message to complement the underlying PR, social media and digital activity.
Ms Walker added: “Following a campaign as successful as the Pulled Pork Campaign, it was always going to be a tough challenge. It’s hard to bring about change in this industry, particularly asking retailers to list pork medallions, but we realised we had to grasp the nettle, with an ongoing backdrop of declining fresh pork sales.
“We need to make fresh pork more relevant to the midweek occasion, or it could be left behind forever.”
For more information about the Midweek Meal campaign, contact [email protected]