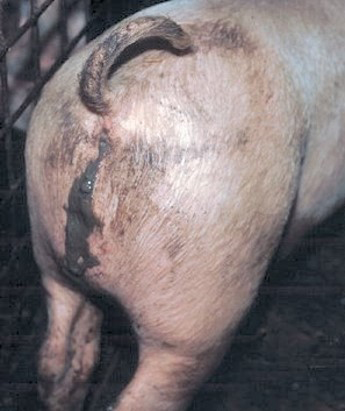 It normally affects growing pigs, with diseased pigs taking longer to reach slaughter weight. It can occasionally affect sows and piglets. But dysentery changes over time and identification can be difficult. It is not uncommon for it to show milder symptoms – for example, it doesn’t always present blood and mucus – which makes it harder to differentiate from scour caused by other enteric diseases.

A range of lab tests can be helpful in making a diagnosis. Producers should seek veterinary advice about appropriate testing strategies if they have any concerns.

How Does it Spread?
Dysentery is passed on via faeco-oral transmission: from one pig’s muck to another pig’s mouth. It can spread within or between units via:

An infected pig farm is a risk to other farms, particularly in pig dense areas. Brachyspira can survive in the environment for 60 days or more in cool/moist conditions, but are killed within days in dry and hot environments. The incubation period is normally seven to 14 days but can be longer.

How Widespread is the Disease?
Gauging the full extent of the recent spread is difficult as reporting is patchy. Notifications via the Significant Diseases Charter have shown cases in 2019 so far in: North, West and East Yorkshire, Norfolk, Suffolk, Buckinghamshire, Nottinghamshire, Leicestershire and Gloucestershire.

But quarterly APHA reports show additional outbreaks not reported on the Charter
in: South Yorkshire, Lancashire, Somerset, Worcestershire, Devon and Wales. Cases have also been reported in north east Scotland.

“All producer signatories and their vets receive the first half of the postcode of an outbreak, along with the planned course of action, but the identity of the producer concerned is not shared with Charter members or external bodies. It’s free to join and takes just a couple of minutes in your existing Pig Hub/eAML2 account.”

Allied industry companies can also sign up to receive the region of the outbreak.

But the Charter’s membership currently accounts for only 68% of all pigs moved, according to eAML2 data.

With growing concerns over under-reporting of the disease, the NPA Producer Group and the Pig Veterinary Society have both endorsed a proposal for the Significant Diseases Charter to be compulsory under Red Tractor. This is due to be discussed by the Red Tractor pig technical advisory committee in October.

NPA chief executive Zoe Davies said: “It is clear that there is a lot more dysentery out there than we think. It is important that we know where it is.”

The Charter only covers English pigs. Scotland has a separate Scottish Pig Health Charter, which all members of the Quality Meat Scotland (QMS) assurance scheme are signed up to.

Disease Spread Prevention
The industry’s #MuckFreeTruck campaign was launched to promote the thorough cleaning and disinfection of livestock vehicles, partly in response to concerns that some recent outbreaks were caused by vehicle spread. 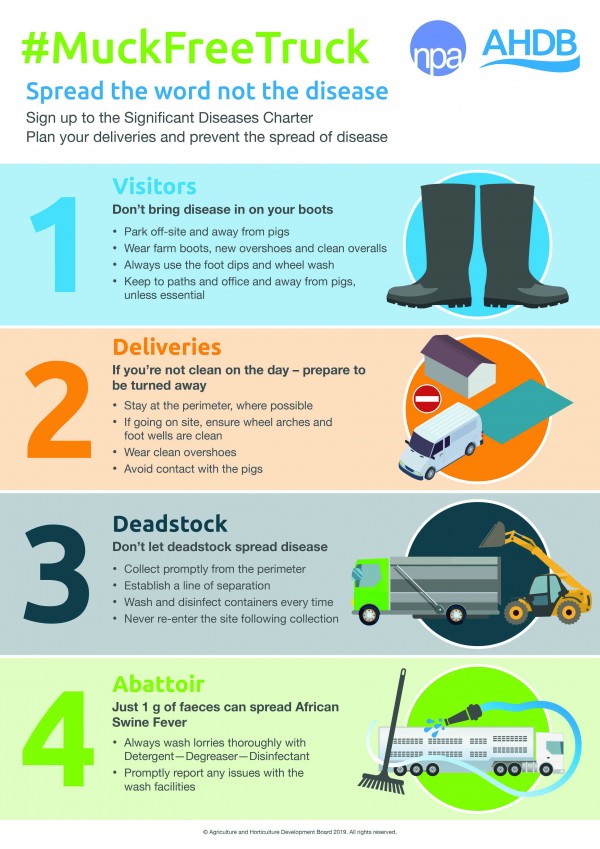 Ms Dimmack urged producers to regularly review disease prevention measures with their vet to address weak points on farm, including:

Dealing with a Case
Any farmers concerned about potential symptoms of swine dysentery should seek immediate veterinary advice.

If a positive diagnosis is made, further advice will be needed to deal with the immediate problem and reduce the risk of infection spreading more widely. The steps taken to treat it will vary from case to case but may include:

“APHA and SRUC surveillance data show a clear upward trend in confirmed swine dysentery cases in the UK in the last four years and there’s a lot of anecdotal evidence too,” he said. 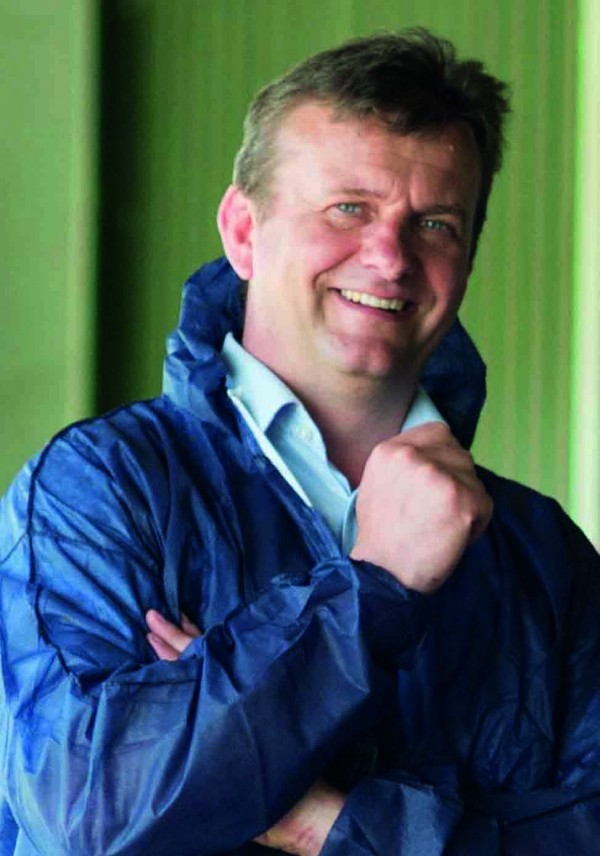 “Due to heightened awareness, we are also testing more, which must be considered a good thing. If there are any positives, one must be that any extra efforts to prevent this disease spreading will also have impact on the risks for other infectious diseases, including ones we already have, such as PRRS, or even ones we don’t, such as ASF or PED.

“The challenge is that once a disease is on the rise, it can be hard to slow down and turn around. The diverse nature of our UK pig sector is something we can be proud of, but it also adds unique vulnerabilities. Multi- site production, as just one example, means more movements of pigs.

“Positively, though, we should remember that the industry has been here before. Producers, vets and allied industry all worked together to get on top of a spate of dysentery outbreaks in East Anglia a decade ago and we can do the same again.

“It’s a disease we already know how to treat, control and eliminate and we are building more knowledge of the current situation all the time.”

Everyone’s responsibility
Mr Pearson explained that a genetic sequencing project by APHA and SRUC found there are around eight known different types of Brachyspira hyodysenteriae (B. hyo) bacteria in the UK. This, along with surveillance work, suggests that the current series of swine dysentery cases do not all originate from a single B. hyo type or, therefore, source.

“So, everyone is potentially at risk, regardless of where they’re located or whether they are a major integrator, independent family business or smaller-scale pedigree breeder. We all need to do everything we can to manage the risks at places where pig businesses overlap, whether that’s the transport lorry, abattoir, lairage or farm. We must also seek to improve engagement with smaller scale producers to reduce risks to all pig farmers.

“The focus on improving cleaning and disinfection of vehicles, as highlighted by the #MuckFreeTruck campaign, must continue but it must be in combination with other means of protecting our pigs. Farm gate biosecurity, avoidance of local spread, adequate surveillance and sharing information must all play a part. It’s everyone’s responsibility.

Mr Pearson said he did not think reduced industry use of antibiotics was a significant factor in the apparent spread of SD, but a small number of cases may have previously remained without showing symptoms due to antibiotic use. “Testing of recent dysentery isolates has generally suggested good sensitivity to antibiotics, including tiamulin, which is often a first line of treatment,” he added.

Advice to producers
Mr Pearson advised that all producers should, at the very least: