Rob farms with his father and brother. They have a large mixed farming business comprising arable, pigs, chickens, meat distribution, renewables, environmental schemes and office rentals. The pig business now has 8,000 outdoor sows and buys in weaners from a further 3,000 outdoor sows. They produce 600 free range fat pigs per week, which they sell to butchers around the country via their own meat distribution business that operates under the Packington Free Range brand.
About 4,500 fat pigs per week, reared on third party farms and all on deep-bedded straw and at low stocking densities, are marketed as outdoor-bred pigs under the RSPCA Assured label.

In his report, which he presented at the Nuffield Conference in November, Rob explains how, when he was first awarded the Scholarship, he intended to make it about making pig farming more profitable. But he became increasingly disillusioned with a topic that seemed so self-serving.
“I have a good business in the UK, which I am successfully growing, but I didn’t want that to be my sole focus. I didn’t want to focus purely on business growth and wealth creation? I am very fortunate with what I have, and for me a key motivation is that I want to contribute in some small way to a better world, even if that contribution is very small.”

After reading reports about food poverty, Rob decided to research how farmers could make a difference – inspired by Victorian entrepreneurs who understood that it was part of their social contract to give back.
“The UK is typical of many of the world’s countries in terms of wealth inequality. The bottom 10% of the UK population have an income of less than £9,644, whereas the top 10% have an income of more than £83,875,” writes Rob in his Nuffield report.
“Now, I am very much a believer in capitalism, free trade and entrepreneurship. However, it seems that capitalism in its current form is not delivering as it should do. Companies can be run with short-term outlooks, and CEOs can be incentivised with bonuses based on share price and short-term profit and not long-term goals.

“There are 8 million people in the UK suffering from food insecurity. Food poverty is also to do with the quality of people’s diets.
“Not only is this not right in a country with so much wealth as the UK but it also contributes a huge economic toll, both on the NHS and the wider economy. Food poverty could become an increasing problem in the UK as food prices increase, incomes stagnate and household fixed costs increase.”

In the course of his studies, Rob visited the Philippines, Singapore, Hong Kong, China, Canada, USA, Brazil, Spain, Denmark and the Netherlands to learn about how food aid projects work in other developed countries and to gain an understanding of social projects.
“On my travels I saw numerous examples of people being very generous with their time and resources and the impact this had on other people. I feel the very basic act of giving, looking for nothing in return, and treating those recipients as equals is a very worthwhile act in itself. People need to know that they are valued and respected,” he said.

“I feel we have a responsibility and a duty not only to feed the nation but to do so in a meaningful, healthy and responsible way” 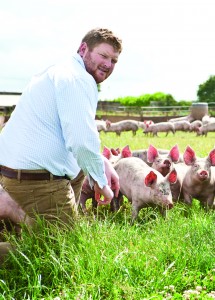 In the US, Rob visited several food distribution charities and decided that when he returned to the UK, he would start his own charity with his wife Sally – and that it would focus on giving out healthy, nutritious food.

“There are a number of charities in the UK at the moment operating in the food sector and doing a tremendous job,” said Rob. “The majority of these are focused on either food waste or emergency hunger relief and, therefore, I feel it is appropriate for me to focus on nutrition.”
Diets in poorer households have been affected by the rising cost of fresh produce, causing people to eat less of it, and because it is cheaper to buy more processed foods. This results in lower intake of vitamins, minerals and fibre and an increased intake in saturated fats and salts.

“As farmers, I feel we have a responsibility and a duty not only to feed the nation but to do so in a meaningful, healthy and responsible way,” said Rob, who has worked hard to use his contacts to source the right food. “We rent land for our pigs off a number of vegetable farmers and were aware of vegetables not entering the human food chain for various reasons, for example specification or over supply. I felt we could work with these growers to create another supply chain utilising some of their grade two vegetables.

“As free-range chicken farmers and pig farmers, we have access to good quality chicken leg meat and pork shoulder meat, which is good value for money as it is under-utilised in the UK supply chain. With friends in the egg industry we were also aware of out-of-spec free range eggs, which, again, could provide better value for money. “Within our current business structure we also distribute free range pork and poultry to butchers around the UK. As a result of this we have refrigerated cold stores and vans that we use to store the products and make the deliveries.”

“I am very fortunate with what I have, and my motivation is that I want to contribute” 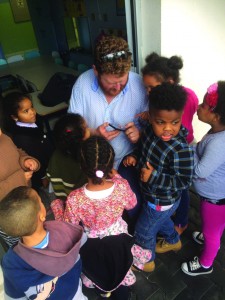 At the schools he’s identified as being in need, Rob sets up a market stall in the playground on a Friday and distributes food and recipes to whoever needs them. He was keen not to means test because he didn’t want any stigma to be attached. He does it on a Friday because children are more likely to go hungry over the weekend when they don’t have a school meal provided.

The charity currently works with six schools in Staffordshire, with the aim of increasing this number to 12. He also wants to gather research statistics on the impact this has, to examine how it can be replicated across the UK.
“I hope that through setting an example of how a farmer can contribute to alleviating food poverty, I can help influence policy makers and contribute to society,” he said.

* To read Rob’s report and see his presentation go to:
www.nuffieldscholar.org

If you are a farmer interested in expanding this project in your area, Rob is happy to talk directly with you. His number is 01283 711547.