So, a little more than two years ago, he decided to take the plunge and thoroughly modernise this stage of production. Having looked at various designs he chose a fully controlled environment building with automatic ventilation, heating and feeding.

The 36m x 10m house has eight rooms each with two pens containing about 60 pigs each, giving a total capacity of 960 pigs. The building was supplied by Quality Equipment, and the producer was impressed with the speed of service. 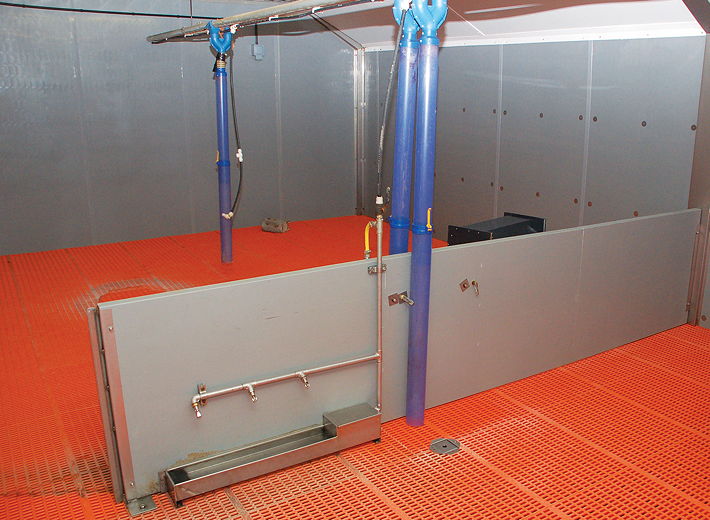 The use of modern materials, such as Paneltim pen divisions, enables the pens to be thoroughly cleaned between batches – particularly important for weaners

“I spoke to them in November 2012 and had the house stocked by February 2013!” he says.
The breeding herd is currently weaning, on average, 27.5 pigs per sow annually. With 12 to 14 farrowing a week, the farm is producing more than enough to keep the pens fully stocked, with any extras going into overflow accommodation. The pigs are weaned at four weeks when weighing 7.5-8.0kg and remain in the weaner pens for 41 days, by which time they have reached 33-35kg.
After two years’ operation, the striking point is the improved performance of the pigs.

“They grow faster and are heavier than those in the old house,” the farmer says. “This improvement follows through to finishing with the pigs reaching slaughterweight seven to 10 days earlier.”

Much of this is due to the sophisticated environmental controls and the feeding system. An in-house computer controls both the heating and ventilation systems. The number of pigs in each room is punched into a keyboard and any losses are also inputted.

For the first two weeks after weaning banks of infra-red heaters are provided and the temperature is set at 25C. This is gradually reduced to 20C by the time the pigs are ready to be moved. The floors are fully slatted, but rubber mats are also put down over the plastic slat panels to ensure extra comfort for the young pigs at this stage. 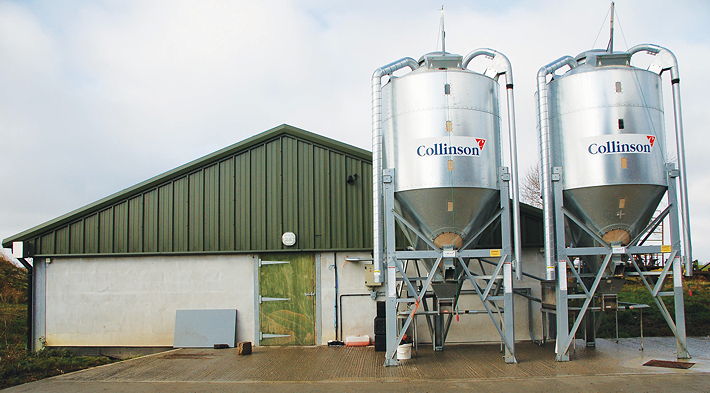 Fresh air enters the pens via a perforated ceiling and exits via a port in each room. Just two large 90cm diameter fans manage the whole building. They suck fresh air out through a chamber that runs the length of the house beneath the roof apex. This system results in a gentle airflow in each pen. Empty rooms can be isolated at the touch of a button.

Feeding is automatically controlled, too. Each pen has a wet and dry Sprintomat feeder, that enables pigs to add water to their feed while eating, plus a dry feed hopper. The piglets take to the wet feed after weaning and “really seem to take off after a fortnight”, says the farmer. But they also eat the dry feed and, besides offering an alternative, this acts as a “primer” for them before changing to dry feed when moved to strawed yards for finishing.

Two diets are fed – a starter and a grower – and delivery to the appropriate pens is again automatically controlled via computer.

Despite all the automatic equipment, the new building actually uses less electricity than the old one. And as the farm is on single-phase supply, this is a big benefit.
There’s a considerable saving in labour, too.

“On a day-to-day basis, we reckon we just spend an hour a day managing the house,” the unit’s stockman says. “The pigs are checked at least three times – morning, mid-day and afternoon. This is facilitated – without disturbing the pigs – by viewing through windows that have been inserted in the walls of the central passage. But a manual check of feeders and drinkers is also carried out on a regular basis.” 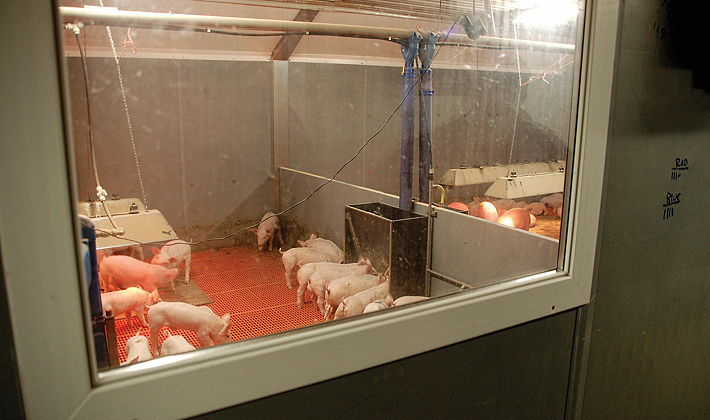 When the pens are emptied, slurry is released via sluice gates to a reception tank, and from there it is transferred via a PTO-driven pump to a lagoon. The self-contained rooms are pressure-washed out after each batch, then left for four days before being disinfected, to ensure a thorough job. Herd post-weaning mortality stands at just 2%.

On removal from the weaner house, pigs are sized up in batches of 50 into 6m x 8m strawed yards. The 30 mono-pitch pens face each other over a covered 10m passage that allows easy tractor access for strawing down and cleaning out.

A plentiful supply of straw means there’s great flexibility in mixing and matching the pigs at this stage.
“They’ve never seen straw before, and it’s such a novelty they don’t seem to want to fight and tail-biting isn’t normally a problem,” the stockman adds.

All diets are mixed on the farm, using concentrates under the direction of a nutritionist, and the supply of home-grown grain is usually sufficient. With a rotation of spring and winter wheat, and spring and winter barley, there’s no restriction from the EU’s controversial three-crop rule. However, some straw is brought in under a straw-for-muck arrangement.

The annual production of almost 7,000 finished pigs is marketed via the Thames Valley Cambac marketing co-operative. There are two main reasons for this. First, it provides insurance against payment default; and second, selling pigs can be a stressful business.
“I like them to take the stress,” the producer says.

The weaner house cost a total of £240,000, with the money secured at a favourable rate of interest. The house is on target to pay for itself within 10 years. However, with a 25p/kg deadweight differential between British and Continental pig prices, there’s concern by this particular producer about whether UK prices can be sustained in the face of a fall in the value of the euro relative to sterling.