The HH co-op implements routine vaccination programmes for endemic problems, such as porcine circovirus type 2 (PCV2), and maintains a stringent hygiene policy with vigorous infection control measures aimed at breaking disease cycles.
“A good example is the introduction of a specific gilt rearing unit on the Schepers unit,” said Mr Janssen. “Replacement females are now managed separately away from the finishing herd and this has improved the health status of young animals moving into the breeding herd. It has stopped the recirculation of pathogens from the finishing pigs back into the sow population.”

The business also introduced a reporting schedule for all departments, which monitors daily trends such as feed and water intake. Any ‘concerns’ are noted and, if necessary, actions are taken to preclude potential breakdowns.
Mr Janssen believes this tough stance on AB reduction has encouraged pig producers and vets to re-establish good basic husbandry techniques and identify how ill health manifests.

“Being more proactive will allow producers to manage health more effectively and reduce the need for ‘mass medication’. This concept is becoming increasingly evident throughout the Dutch pig industry, because it works,” he said. 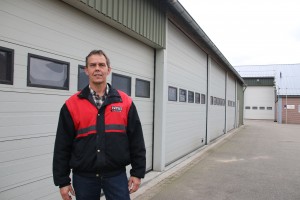 Rene Weijs manages a commercial 3,200-place finishing business, which takes pigs from 27kg to 110kg. It is part of 750-sow pig production and vegetable enterprise he runs with his brother.

The unit has undergone significant refurbishment to improve environmental controls and water quality, with the objective of further improving health status and reducing production costs.
A bore hole supplies water to the farm and significant investment has been made in the filtration, purification and delivery system. The pigs’ drinking water is now supplied via three colour-coded water lines: fresh (blue) acidified (red) and with vitamin/mineral supplements (green). Another separate washout line serves the farm’s pressure washing and disinfection system.Banks of pipes and valves are also located in the corridors outside the finishing rooms to allow independent control of water supplies. Medication can now be delivered accurately to individual rooms, while the business can also explore alternative in-water treatments, such as organic acids and nutraceuticals.

“Ileitis has been a persistent problem and was previously managed using routine medication,” Mr Weijs said. “Producers still need methods that can safely and effectively medicate groups of pigs with antibiotics if they are sick. Dosing water supplies is efficient, strategic and accurate, but water supplies must be clean and of a consistent quality.”

His business has strived to minimise antibiotic use, preferring to solve problems through proactive disease prevention (vaccination at weaning), improved husbandry and better management. AB use has remained below 10 ‘Defined Daily Doses per Animal (DDDA)’ since regulations were introduced in 2011. Current records show AB use is 3-4 DDDA and ileitis is under control, which Mr Weijs believes is largely due to the sanitised water supply and routine use of acids and gut conditioners supplied via drinking water.

Mr Weijs has been encouraged to feed finishers a course of grist meal, delivered ad lib though wet/dry feeders. Three home-mixed diets are used and pigs are blend fed to create a range of specifications more closely matched to their requirements through their growth curve, helping optimise lifetime performance and feed conversion ratio, and reduce feed costs.
His slaughter pigs are currently averaging between 850g and 900g ADG with an FCR of 2.35. 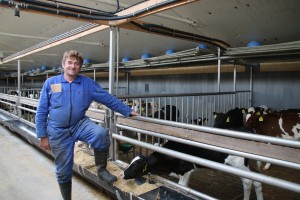 Keir Bloemert was a pig farmer for more than 30 years, but he quit in 2013 due to poor economics. Veal calves are now reared in his converted pig buildings and he finishes two batches of 650 animals a year.

But disease remains a challenge – mainly from respiratory infections – and a systematic, vet-led health strategy, has been put in place. Calves are sourced from health-conscious suppliers and guaranteed to be ‘viable’ for up to six weeks after arrival.

Compensation is given if mortality/disease breakdowns occur during the first 14 days of production. Biosecurity has been tightened and nutritional supplements containing essential oils (oregano) are routinely used for the first 10 weeks of production, helping to reduce digestive ills.
These control measures are proving successful and have cut back AB use, but records show regular medication is still required to treat pneumonia.
Observations made during our visit suggested that additional improvements to ventilation, hygiene protocols and disease detection/surveillance could offer further benefits to herd health.

The Dutch approach to AB reduction has forced change, but most UK vets would not like a regulated system, said Richard Turner, director of St David’s poultry team and its arm launched to find alternatives to antibiotics, Applied Bacterial Control (ABC).
“The Dutch system has loopholes, which potentially could allow for some abuse.
“To have a tight regime there needs to be more testing of final product and I am more inclined to favour a system that is industry and retailer-led rather than a prescriptive government system,” he said.

Vets, he said, must be able to present a range of cost effective protocols and solutions that would support farmers during the transition period, something the Dutch policy had not achieved in its early stages.
ABC vet Charlie Carslake highlighted what he felt was a ‘heavy-handed’ initiative. “I would prefer to see a more balanced approach used here, offering good levels of support and some funding,” he said.

He did, however, support the transparency of NL’s AB initiative and its data recording and benchmarking, particularly between individual farms within a single practice. “A unified national database detailing usage between both farms and vets in the UK would be very valuable,” he added.