Exhibitors from 62 countries will be in attendance, including 62 from the UK, while there will be first time exhibitors from Morocco, Bangladesh, Vietnam, Hong Kong, Paraguay and Uruguay.

EuroTier organisers have already awarded this year’s Gold Medal for innovation – chosen from more than 300 entrants – to German company Meier-Brakenberg for its Speedy Trough Suction Unit (see more below). Silver medals were awarded to 25 products, including an electronic method of closing self-locking cattle headlock gates, a new colostrum feeder for calves, a smart thermometer and a pig toilet (see below).

Meier-Brakenberg won the EuroTier 2018 Gold Medal for its Speedy Trough Suction Unit (pictured), designed to quickly clean pig troughs. Feed hygiene is vital to ensure animal health and performance in pig farming, but all too often feed is left in troughs and becomes a breeding ground for bacteria and subsequent disease. 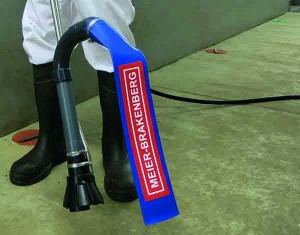 The Speedy trough cleaner, which is connected to the gun of a high-pressure cleaner, can rapidly remove wet or dry food from troughs and after emptying, the trough can be cleaned with the washing lance by switching over to the cleaning nozzle to ensure optimum hygiene and that the next ration of feed remains fresh for longer. 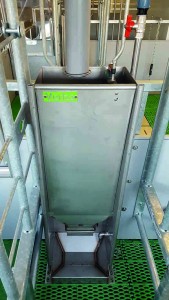 The KZB feeder (pictured) is manufactured with a low profile that allows the piglets to access the sow’s feed. After a few days, they will eat alongside her and at weaning they know exactly where to look for their food, aiding an easier transition to a solid diet.

During testing, the manufacturers found the piglets started taking a bit of feed from the trough on the fifth day. The KZB feeder was also found to reduce labour.

The KZB feeder can be placed in farrowing pens and the same feeder can be kept
at weaning to suit a typical litter of around 15 piglets.

Flushed with success
Reducing ammonia emissions in pig houses is a huge goal for the industry – one that Big Dutchman hopes to have solved with its new toilet for pigs. 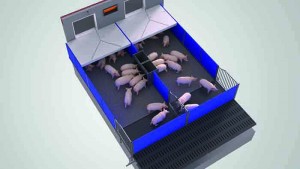 The PigT (pictured) forms part of a finishing pen with a continuous solid floor. Urine and manure are separated directly after excretion and transported from the house at regular intervals – the pig toilet is a plastic surface on which the pigs can stand and walk, but which also acts as a conveyor. Small openings in the plastic elements allow urine and other liquids to drip into a collecting pan.