David says the primary reason for dealing with flies is because they carry and spread disease; in fact, about 120 different diseases have been found in flies (not all at the same time, thankfully), with about 80 of these recognised as zoonotic (can affect human health).
From a practical point of view, this means that flies can spread scours or worse in the farrowing house, weaner accommodation or finishing shed just by ingesting bacteria in one pen and carrying it to another. Most of the spread is caused by the flies’ method of eating, which is to regurgitate through their proboscis onto a new food source and then suck up the resulting “soup”. All the brown spots that you see on surfaces in a fly-infested area are made up of this fly “spit”. 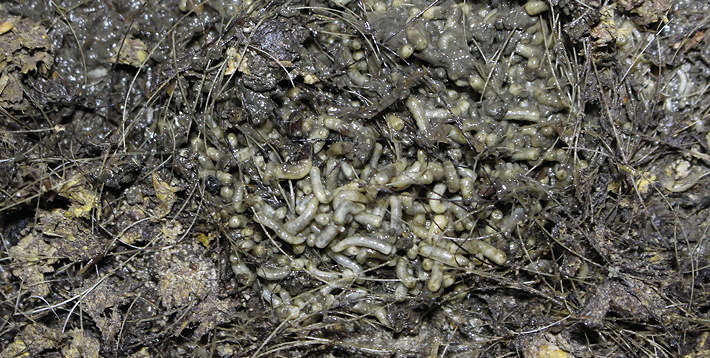 If flies are a problem in your pig accommodation, maggots will be found in the top few centimetres of slurry under the slats

“You can put all the biosecurity procedures in place that you want, but if there are flies in a building, they will spread disease from pen to pen even if the staff don’t,” he says. “They’ll also move it from room to room and building to building, so nowhere can be considered safe from flies carrying disease.

“There’s also evidence that flies in sufficient numbers will unsettle pigs and bring out vices like tail biting; or even just depress performance from the nuisance factor they create. The working conditions for farm staff also have to be considered.”

Indoor problem
In the pig sector, fly problems tend to be worst in indoor accommodation where the flies lay their eggs in the crust on the top of the slurry. Dig into the top few centimetres of pig muck under the slats and if there’s a fly problem, you will undoubtedly find maggots at all stages of development.

“You may need to check two or three areas before you find them, as flies are very particular about where they lay their eggs,” David says. “They’ll find the ideal micro-climate under the slats and you’ll find a number of flies will all lay their eggs in the same spot. It’s not unusual to find thousands of maggots just below the surface – all waiting to hatch into flies.”
In fact, the flies’ eggs spend just a few hours in that form before they develop into the first of three larval (maggot) stages. A week later and the final larval stage transforms into a fly.

“If the temperature and humidity are ideal, the whole cycle from egg to fly can be as short as seven days, but this can extend to as much as 28 days in less than ideal conditions,” David says. “That’s why some pig producers will occasionally see a huge explosion in fly numbers during changeable weather; batches of eggs laid at different times that had been held back from hatching by cold weather will all suddenly “switch on” and emerge at the same time.”

Control strategy
Although the problem on this particular farm is in the finishing sector, pig production starts in the farrowing room and this is also the ideal place to start your fly control strategy.

“The best way to manage flies is to make it part of the cleaning and disinfection routine,” David says. “Just before the next batch of sows comes into the room, spray Lodi UK’s Maggots larvicide through the slats and onto the slurry crust to kill the larval stage flies. The larvicide will remain active for about five weeks, which should prevent new flies hatching from the treated area right through to weaning in most systems. 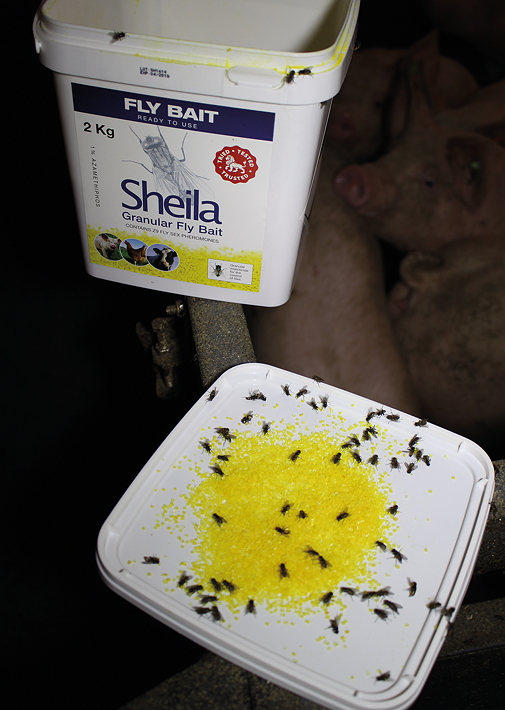 Lodi’s Sheila attracts flies to help with identification, as well as providing a quick and efficient kill when used as a bait

“In this instance I’d recommend using Lodi UK’s Sheila fly bait to deal with any flies that emerge from untreated areas, or that find their way into the room. This can be stuck to sheets of card about A3 in size using wallpaper paste, and these can be hung from the ceiling. The flies are attracted by pheromones in the bait – as well as other attractive ingredients – and will be killed very quickly, and fall to the ground. The bait on the card will remain active for two or three months – essentially until it has all been eaten – but some units might prefer to replace the cards after each batch.”

The cost of Lodi’s dissolved Maggot bait to treat slurry with a surface area of about 30 square metres would be about £10.00, while Sheila bait to produce three A3 cards (covered on both sides) will cost about £40.00.

“In a treated room, you shouldn’t really see many more than 20 or 30 living flies,” David says. “If numbers start building up, it may be a sign the larvicide needs re-applied. This will be unlikely in farrowing or weaner accommodation, but in the finisher house – like on this farm – a second application will need to be sprayed through the slats after about five weeks.”

In severe cases where there are large numbers of flies to deal with at the start of the treatment cycle, a knock-down spray like Lodi’s Twenty One can be used.

“I’d advise sprays are employed sparingly as they can induce resistance in the flies quite quickly when they breed so quickly,” David says, “but they do sometimes have a role to play. But when fly control is built into a unit’s cleaning and disinfection routine, there will be little need for it.”

The treatment you need to carry out in your pig accommodation can vary depending on the species of flies causing the problem. The common house fly (Musca domestica) is most common, but the lesser house fly (Fannia canicularis), and stable flies (Stomoxys calcitrans) can also be an issue.

Larvicidal treatments work with all of them, but methods of providing bait differ as the flies rest in different ways and some are best treated by applying bait to the building walls.
Taking advice to identify the cause of your fly problem can pay off to prevent wasting insecticides by using the wrong product in the wrong situation.