However, this could be about to change with interest in the system growing in the UK. Significantly, at the end of April, Red Tractor issued new guidance for members wishing to install them.

What is a pig housing balcony?

A housing deck provides a balcony structure within the pen and a ramp, which allows pigs to easily access the upper area, which is made from one of three materials: concrete, composite and plastic.

All manure produced on the balcony is collected underneath and directed into the tank below the room.

This system increases the floor area for pigs and effectively provides a lying/resting area within the pen, in addition to being a cost-effective way to gain extra space allowance per pig without increasing the overall pen footprint.

The first balcony systems were introduced in the Netherlands around 20 years ago, although their use dwindled as it became easier to build outwards. That was until expansion options became more limited, and, amid a sharper welfare focus, balconies were resurrected in continental Europe.

Company director Bart van Osch said: “With the introduction of the star rating for animal welfare, it became necessary to give stock more space. Many farmers could no longer extend outwards so this system was a good option. We have spent many years perfecting the system, working with a group of 10 farmers and other stakeholders, such as equipment manufacturers, to get more specific information, which helped us to fine tune our system and iron out problems.”

Differing welfare regulations stipulate a larger surface area per pig is required in the Dutch systems, where 0.8 sq.m per pig weighing up to 110kg is required for growing and 1 sqm per finishing pig, as opposed to the smaller 0.6 sq.m set as an EU minimum requirement. This has led some farmers to find practical ways to increase space within existing buildings rather than decreasing herd size.

The balcony system also provides a ‘more interactive and varied environment for the pigs’, with all the benefits of improved welfare and productivity, according to the team at the Sterksel Swine Innovation Centre, which is part of the Wageningen University in central Netherlands. The SIC team have been looking at developing the optimum balcony system since 2000, working closely with farmers, researchers, animal protection agencies and the government.

The latest design was launched in 2015 and is a system that has also now been trialled in Ireland and the UK. 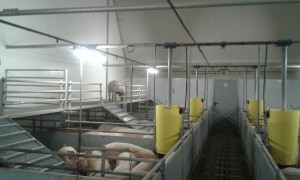 Initially, the Sterksel trials found that 95% of pigs in the pen used the balcony, with no negative impacts reported on animal health and performance, including growth, feed conversion ratio, meat quality or lameness. In addition, it was easier for pigs to avoid aggression. They quickly learned how to use the balcony and evade the bullies.

The balcony system also allowed for provision of enrichment, such as scratching devices, and the team at Sterksel is now investigating the benefits of providing straw and other types of enrichment on the balconies. Such materials should be edible, chewable, investigable and manipulable, (objects such as floor toys, hanging toys and chains do not meet the requirements).

This has the added benefit of dealing with the issue of tail-biting. Although no scientific research has been done, anecdotal evidence shows definite advantages. A set-up in Germany split piglets into two groups in the same indoor building, the balcony system pigs had no issues with head butting or tail-biting at all, while the traditionally housed half did not fare so well.

In most cases, as the system is retro-fitted into an existing house, the ventilation system may not be designed for an increase in the number of pigs within the house. The balcony can cause issues with air movement within the house (dead air pockets), and a higher number of pigs can affect the rate of air turnover/temperature control, making the pigs more vulnerable to respiratory diseases. 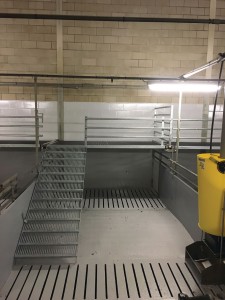 It is important to get the ventilation system and capacity right and ensure a good climate in the building. This can be achieved by having some slatted areas in the balcony in order to allow airflow to reach areas underneath and avoid stagnation.

That said, with a good ventilation system installed, it is possible to create temperature differences above and below, further enhancing welfare conditions.

Some farmers feel that because of these issues, the balconies should be used to increase space allowance per pig rather than the number of pigs per room. There also needs to be a system to prevent manure and urine falling to the floor below. In the system offered by GE Baker (Quality Equipment) in Bury St Edmunds, there is a 5% slope towards the back wall with a manure opening (5cm for piglets, 8cm for fatteners) to enable waste to fall down
the back.

Farmers also reported that it was a more labour intensive system and took longer to check stock, clean and fold up the balconies.

For anyone considering this option, there needs to be a minimum of 4 metres in depth to allow for the ramp/stairs, and the width is in 3m sections.

It is evident that a farmer would not be able to build the same square metre increase in space (even if they had the land available) without planning permission.

The balcony system is recognised and approved by the Dutch Society for The Protection of Animals and producers can obtain a better Leven Star Quality mark as a result.

A couple of UK building suppliers have this type of system available already, but producers considering installing a balcony system are advised to check that they meet assurance scheme requirements. It is advisable to speak to the certification scheme before installing.

Is it approved in the UK?

The Red Tractor scheme, covering 90% of UK production, has just issued new guidance on balcony systems, after the pigs scheme’s Technical Advisory Committee (TAC) considered the suitability of the Dutch system in relation to scheme standards.

“If you are considering changing your pig housing, please ensure you remain compliant with the standards,” a Red Tractor spokesperson said.

NPA chief executive Zoe Davies, who worked with the TAC to develop the new standard, said: “The balcony system looks very interesting and certainly has the potential to deliver economic benefits for producers, without comprising on animal welfare.

“In principle, I think it could provide a useful solution to people who are looking to reduce their stocking density and provide the pigs with an added dimension to the pen. They are already being used in other EU countries and so it is important UK producers can take advantage of the system if they want to, provided they follow Red Tractor’s installation guidance.”

Detailed guidance can be found on the Red Tractor website.