Ms Wilkins pointed out that the size of the confidence intervals for the pig survey suggests Defra is 95% sure the female breeding herd is between 300,000 and 332,000 head, which she said was ‘quite a wide range for a figure that is not particularly variable year by year’.  This makes it difficult to draw conclusions from the annual changes reported, she said. 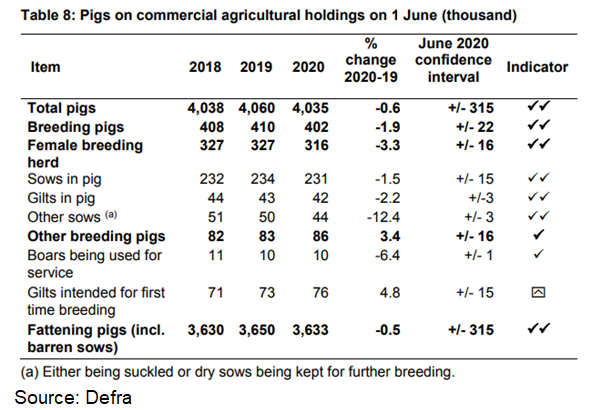 The numbers for maiden gilts number in particular should be treated with caution – the 95% confidence interval ranges from 61,000 up to 91,000 head.

“If the figures were correct, the drop in the number of in-pig sows and gilts would probably cancel out any productivity improvements recorded, constraining the number of piglets born over the summer. In turn, this would indicate that pig supplies would stabilise for the rest of the year,” she said.

The figures for the number of fattening pigs are also unexpected, showing a slight decrease to 3,633,000, 17,000 fewer than a year earlier – although again there is a wide confidence interval of 315,000 pigs either way.

“With sow productivity improving during the start of this year, this seems unlikely (unless the breeding herd was declining in the second half of last year, against our expectations),” Ms Wilkins said.

“Many of the fattening pigs would have come to slaughter since June, but throughput has remained up on the year. Defra figures show that English clean pig slaughter between June and August was up 1% on a year earlier.

“Our estimates for GB throughput suggest numbers have been up by as much as 11% year-on-year in September so far.”

Census figures for the UK as a whole are due to be published next month.